The France-based leg of the yearlong South Korea-France cultural exchange project has drawn the curtains with a colorful flourish, celebratory of the 130th anniversary of the bilateral diplomatic ties.

As of the end of August, the events of the "Years 2015-2016 of Korea-France Bilateral Exchanges" have hailed about 2.26 million visitors in France, which ran from September 2015, the South Korean Ministry of Culture, Sports and Tourism said on Tuesday.

Being the largest cultural project between the two countries in terms of scale, running period and number of events, the double threaded event introduces South Korean cultural events in France and French counterpart events in South Korea.

The France-based events took place at some 120 cultural institutions in 63 French cities, presenting about 200 events that explore Korean traditional and contemporary culture, politics, economy and education. 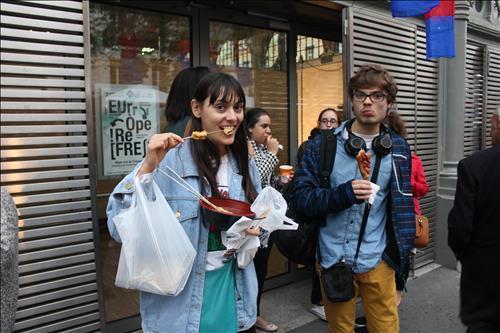 French locals enjoy boiled fish cakes and corn dogs in the Korean street food festival held in Paris on Sept. 26, 2015. (Yonhap)
Some of the most popular Korean cultural events turned out to be "Seoul Night! Techno Parade," a Korean-style dancing and entertainment-focused parade that drew 400,000 visitors. Korean handcraft exhibitions and photo exhibition by Korean photographer Bae Byung-woo were also in the limelight.

In March, Hollande showed his support for the bilateral project by visiting the Korean section of the "Book Fair in Paris," held in the French capital.

A total of 88 contributors to the French-based "Years 2015-2016 of Korea-France Bilateral Exchanges," such as Chaillot National Theater chief Didier Deschamps, received honors in the closing ceremony that was held in the diplomats' club in Paris. In Chaillot National Theater in Paris, South Korea's National Gukak Center artists wowed the local crowd with Korean traditional performance art, including "Jongmyo Jeryeak," the ritual music played in ceremonies at two shrines dedicated to the 19 kings of the Joseon Dynasty (1392-1910) and the 15 people of exceptional merit from the royal family.

"The yearlong events of Korea-France bilateral exchanges has presented the precious opportunity to look back on the 130 years of strong friendship between Korea and France," said South Korean Culture Minister Kim Jong-deok during the closing ceremony.

The Korean leg of the "Years 2015-2016 of Korea-France Bilateral Exchanges" is set to hold a separate closing ceremony in December, putting an end to the bilateral event.  (Yonhap)