The first subunit, Angel Line, consisting of members Solar and Whee-in, will be presenting “Angel,” while the remaining duo Rapper Line with Moon-byul and Hwa-sa will be releasing “Dab Dab.”

Although the promotional posters feature the four members in matching outfits, the tracks capture two different sides of Mamamoo, according to a statement from the group’s public relations agency.

The two-year-old girl group first presented an exclusive live performance of the two songs earlier this month at its first two-day solo concert “Moosical,” held at Olympic Park in Seoul. 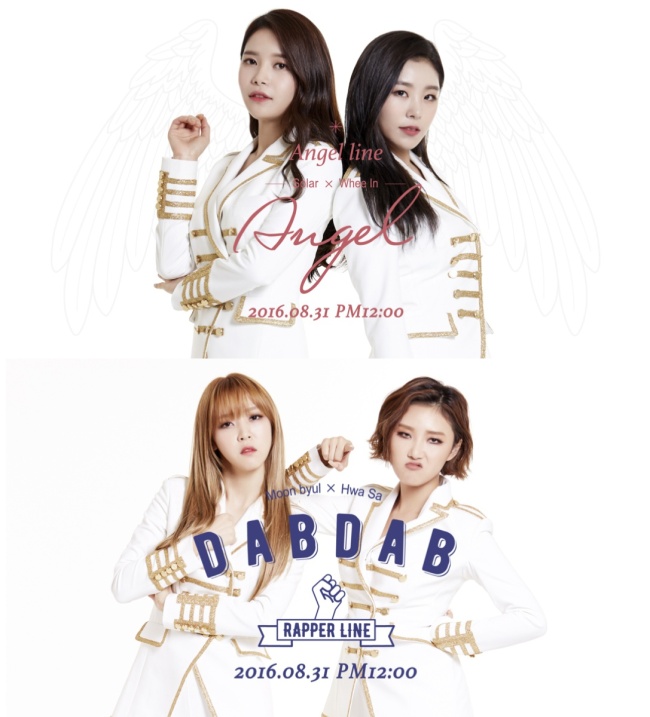 Promotional poster for K-pop girl group Mamamoo’s sub-unit releases (Rainbowbridge World)
After debuting with the hit single “Mr. Ambiguous” from the mini album “Hello” in 2014, Mamamoo has garnered a wide global following in a relatively short period of time. The group’s first full-length studio album “Melting” topped the K-pop chart on US iTunes upon its release in February.

Meanwhile, the four-member act is gearing up for its performance at an upcoming K-pop concert, taking place at Gocheok Sky Dome in Seoul on Sept. 7, to heighten anticipation around the PyeongChang 2018 Winter Olympics.

“Angel” and “Dab Dab” will be available on local music sites from noon Aug. 31.