[ The Korea Herald – Send E-mail ]
1 in 4 children at state-run shelters victims of abuse: study
By 이다영
Published : Aug 21, 2016 - 18:08
Updated : Aug 21, 2016 - 18:09
The largest proportion of South Korean children who were placed under public foster care last year were domestic abuse victims, followed by children from broken homes and those born to unwed, single mothers, a government study showed on Sunday.

It is the first time since 2008 -- the year that South Korea started documenting data on children in foster care -- that young abuse victims accounted for the largest proportion of all children who have been placed at either public shelters or foster care parents. Up until 2014, the biggest number of such children were either children of unwed mothers or those with divorced parents.

According to the study jointly complied by the Welfare Ministry and the National Foster Care Center, a total of 4,503 children were separated from their parents and placed under government protection last year. The largest proportion of them, 25 percent, were those who had been physically or emotionally abused at homes, while 23.7 percent were those from broken homes. Meanwhile, 20 percent were children of unwed, single mothers. 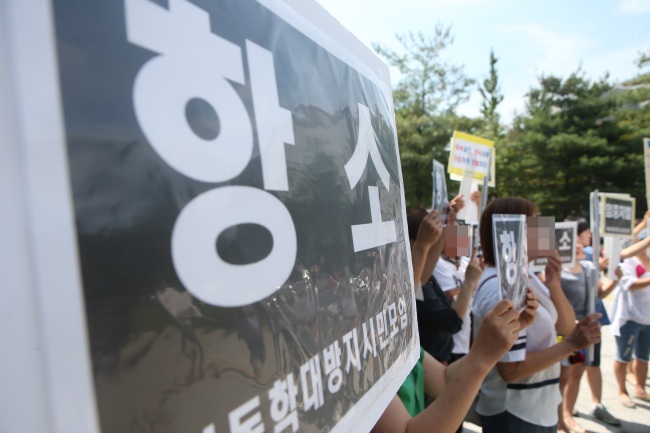 Members of an anti-child abuse organization stage a protest on Aug. 10, calling for strict punishment on parents of Shin Won-young, a seven-year-old who died in February after being severely abused and neglected by his father and stepmother. The stepmother was sentenced to 20 years in jail, while the child’s father was sentenced to 15 years behind bars. (Yonhap)
Only 6.68 percent were orphans who lost both parents, while 0.57 percent were children who got lost.

South Korea has seen a number of high-profile child abuse cases this year, including the case of Shin Won-young, a 7-year-old child who had allegedly been locked up and beaten for three months by his stepmother before his death in February. To tackle child abuse, the Gender Ministry has been offering and encouraging Koreans to attend classes on child care and parenting. As of this year, about 80 percent of all reported child abusers are the victims’ parents.

The report by the Welfare Ministry also showed that the number of abused children in government foster care increased from 2008-2015, from 891 to 1,094.

Among the 4,503 children who were separated from their parents last year, 2,682 of them were admitted to shelters or children’s institutions, while 1,821 of them were either adopted or placed with their grandparents, relatives or temporary foster parents.

The report also showed that children of unwed mothers who have been placed at shelters decreased significantly from 2008-2015, from 2,349 to 930. Last year, the Child Support Agency was established after a government study showed that 83 percent of all single parents in Korea never received any child support payments from their ex-spouses or ex-romantic partners as of 2012.

Almost 80 percent of all Korean single parents are women, while about 90 percent of Korean adoptees are born to unwed mothers who have few resources to raise their children alone and are vulnerable to social stigmatization.