NEW YORK (AFP) - Donald Trump on Wednesday shook up his campaign team for a second time in just two months, fending off suggestions that his presidential run is in crisis as polls show Hillary Clinton cruising toward victory.

The Republican White House nominee, who is tanking in swing states, hired a news executive from a virulently anti-Clinton website as his campaign chief executive and promoted a leading Republican strategist to campaign manager. 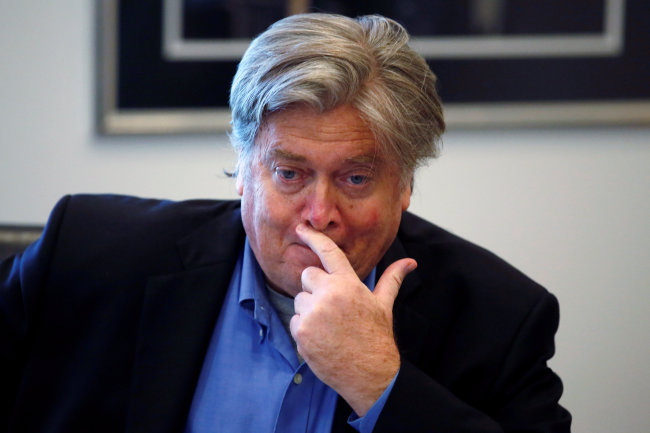 Campaign CEO Stephen Bannon listens during Republican presidential nominee Donald Trump's round table discussion on security at Trump Tower in the Manhattan borough of New York. (Reuters/Yonhap)
"I am committed to doing whatever it takes to win this election and ultimately become president," the New York billionaire announced.

Critics warned that Bannon, a former Goldman Sachs banker, was unlikely to make the populist candidate, who has upended the Republican establishment, any more palatable to moderate voters or any less controversial.

"There is no new Donald Trump. This is it," Clinton told a rally in Ohio.

"He is still the same man who insults Gold Star families, demeans women, mocks people with disabilities and thinks he knows more about ISIS than our generals."

Her campaign's manager accused Bannon of presiding over a website that "peddles divisive, at times racist, anti-Muslim, anti-Semitic conspiracy theories."

"We absolutely expect with this change for Donald Trump and the campaign as a whole to double down on more hateful, divisive rhetoric, more conspiracy theories, more wild accusations," Robby Mook told reporters.

The shake-up comes with chairman Paul Manafort under fire in the press after being named in a Ukrainian corruption scandal.

Clinton is leading Trump 47.3 percent to 41.2 percent, according to the Real Clear Politics polling average. The Republican languishes behind her in virtually every key battleground state, raising the prospect of a Clinton landslide win.

Trump has been badly damaged since denigrating the parents of a Muslim American soldier killed in Iraq, members of the so-called Gold Star families who have lost loved ones in military service.

Critics also accused him last week of inciting violence against Clinton in a remark about the right to bear arms.

A string of prominent Republicans have announced they will not vote for Trump as media reports swirled about a campaign in crisis and staffers unnerved by a candidate apparently incapable of reeling in crass remarks.

While his tweet-saturated, populist, outsider campaign defeated 16 rivals to win the Republican nomination, Trump has rejected suggestions that he should change tack to win the November election from the center.

"I mean you have to be you. If you start pivoting, you're not being honest with people."

Wednesday's is the second personnel shake-up at the top since June 20, when Trump dropped his first manager, Corey Lewandowski, who was sidelined by Manafort after he courted controversy by allegedly grabbing a Breitbart reporter.

Bannon, a former naval officer, is seen as a maverick. An October 2015 profile by Bloomberg Politics described him as "the most dangerous political operative in America."

He is "a bit of a street fighter, willing to go right at his opponents, and make sure that they know that in politics, all is fair," Lewandowski told CNN.

Some see Bannon's arrival as a demotion for Manafort, the seasoned Republican adviser returning to presidential politics for the first time in 20 years after working as a lobbyist for controversial clients.

Chief among them was Viktor Yanukovych, the pro-Kremlin former president of Ukraine whom Manafort helped rebrand until he was deposed during a popular uprising in 2014.

The head of Ukraine's newly formed National Anti-Corruption Bureau said this week that more than $12 million was earmarked for payment to Manafort from 2007 to 2012, although it was not clear if he received the money.

The Republican received his first classified intelligence briefing in New York on Wednesday nevertheless. The privilege is provided to presidential candidates of the two main political parties to prepare them for the nation's highest office.

During an interview with Fox News broadcast afterward, Trump lashed out again, saying he had scant trust in the intelligence community delivering the briefing, and would be unlikely to install any members of the current security establishment in his presidential administration "because they've made such bad decisions."

In comments to Fox News aired earlier, he claimed that the polls were narrowing and, when asked if he had imagined running for president as a child, deployed some of the populist candor his supporters admire.

"I didn't," he said. If I did, I would have been less controversial."

The real estate tycoon made his first substantial pitch to African American voters on Tuesday, telling voters in Wisconsin that Democrats had "betrayed" them and promising to revitalize impoverished urban communities.