Depicting the EPS as a “modern-day slavery” system, an association of more than 100 lawyers, foreigners and labor rights groups urged the government to amend the labor policy to protect migrant workers’ labor rights and human dignity.

“The government promotes the Employment Permit System as an advanced institution treating migrant workers and local Koreans equally, but the system is not different from forced labor of migrant workers,” the groups said at a press conference in front of the Seoul office of the Labor Ministry in central Seoul.

The South Korean government launched the Employment Permit System in 2004 to replace the controversial Industrial Trainee System in the wake of growing criticism over employers’ exploitation of trainees unprotected by labor rights. 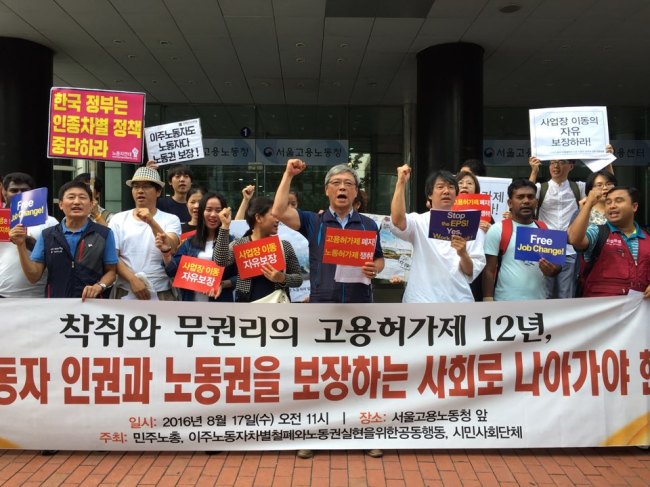 Migrant workers and civic organizations hold a press conference in front of Seoul Regional Employment and Labor Office in central Seoul, Wednesday. (Ock Hyun-ju/The Korea Herald)
The EPS invites unskilled workers from 15 nations, mostly in Central and Southeast Asia, to fill low-paid jobs at small and medium-sized firms that are not taken by Korean workers. Under the scheme, migrants can work for up to three years, after which the period can be extended for one year and 10 months if employers agree to it.

“The implementation of the EPS significantly decreased the number of migrant workers illegally working and staying in Korea and corruption cases,” said an official from the Labor Ministry, who asked not to be named.

In 2011, the EPS received the first place prize of the UN Public Service Awards for its achievement in preventing and combating corruption in the public service.

Migrant workers and civic groups, however, have accused the system of being employer-friendly, taking issue with how the system does not allow workers to change employers and pays them severance money only after they return to their home countries, among other issues.

“I felt I came here as a slave, not as a laborer,” said Parvej, a 29-year-old worker from Bangladesh, who has worked in Korea for about a year. “My arms and ankles were injured at work. A doctor told me that I should not carry heavy stuff anymore. I asked my boss to allow me to change workplace, but he told me to go back to Bangladesh if I don’t want to work there.”

“The Employment Permit System only listens to my boss, not me. I could receive neither my wage nor benefits from occupational accidents,” he said.

But the Labor Ministry argues that a ban on changing workplaces for migrant workers is necessary, as the EPS is for the government to curb the shortage of workers for small and medium-sized employers.

“The EPS was launched to help small and medium-sized enterprises rather than hire foreign workers. The migrant workers can enter Korea under the EPS only when their employers agree to hire them,” the official said. “That’s why the government bans them from changing workplaces without employers’ consent.”

“The government still allows migrant workers to change workplaces when their employers shut down their businesses, fail to abide by employment contracts or violate workers’ human rights.”

Working conditions for migrant workers in the farming, agricultural and fishing industry remain especially bad, the civic groups said. They often live in squalid accommodation as well as face delays in payment and the retention of their passports.

“When I first arrived at the workplace in Korea, working conditions were different from what I was informed before. I worked for 11 hours a day only to receive 900,000 won and was forced to pay 500,000 won for a shared room in a greenhouse,” said a woman from Cambodia, who did not wish to be identified. “When I refused to listen to him, he reported to the authorities that I escaped. I am now at risk of losing my work permit.”

Despite the abolishment of the Industrial Trainee System, there are some 3,500 migrant workers who still arrive in Korea under the Foreign Invested Company Technical Trainee System. The visa is granted to foreign workers hired by Korean companies abroad for them to receive job training in Korea.

Srikanth, a 26-year-old Indian man, is one of the laborers working for nearly 300 hours for a Gimhae-based company while receiving only 150,000 won under the job training system.

Cho Young-kwan, a human rights lawyer from Lawyers for a Democratic Society, contended that the EPS system is unlawful according to the Constitution stipulating human dignity and a ban on discrimination.

“The Employment Permit System is not legitimate and should be reformed to uphold the Constitution,” he said. “Workers, unlike slaves, are not confined to certain land or masters. They should have freedom to change their workplaces and be paid for their labor.”