[ The Korea Herald – Send E-mail ]
What drove Ewha students to streets?
By Ock Hyun-ju
Published : Aug 12, 2016 - 16:56
Updated : Aug 12, 2016 - 22:09
On Wednesday evening thousands of students and graduates from Ewha Womans University held a rally on campus to protest what they saw as the school’s unilateral push for a series of policies, demanding the school chief step down.

An estimated 3,500 students and graduates gathered on campus at the university in western Seoul, despite the scorching heat, in its second large-scale rally on campus, holding placards reading “Who is Ewha Womans University for?” and “Owners of this school are the students.”

The clash between the nation’s top women’s university and its students has escalated over the plan to establish a state-funded college of continuing education. Students called the project a scheme to “sell degrees” and “make revenues.” 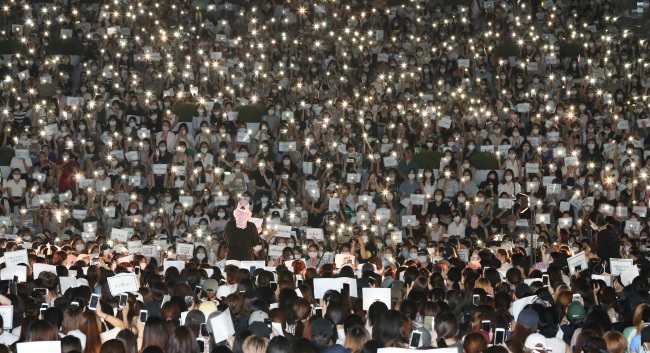 Thousands of students and graduates from Ewha Womans University stage a rally on campus Wednesday, demanding school chief Choi Kyung-hee step down. Yonhap
While university president Choi Kyung-hee stays in her job, 10 high-ranking school staff members, including the deans of academic affairs, admissions, planning and finance, tendered their resignations Friday. In a post they wrote on the school website, they said they felt responsible for not being able to smoothly solve the issue.

An association of some 120 Ewha professors stepped up pressure on Choi, saying her responsibility is “not light” as an educator for tarnishing professors’ pride and authority. They vowed to meet with students face-to-face to ease the conflict.

The students continued a sit-in at the main building of the university for the 16th consecutive day Friday, saying they would continue the sit-in until Choi resigns. More than 25,000 current and former students signed a petition to remove Choi from her post.

After days of sit-ins that began on July 28, the school scrapped the controversial plan to establish the Light Up Your Future in Ewha College program on Aug. 3. Funded by the Education Ministry, the program was to offer bachelor’s degrees in new media, health, beauty and fashion to women who chose to work instead of pursuing further education after high school.

While the university had said the LiFE program was designed for high school graduates and working women deprived of opportunities for education, students cited that there were already life-long education centers and similar courses in the current curriculum.

They also argued the courses in health, beauty and fashion, which the university promoted in a “specialized model for women,” only solidified traditional gender roles.

Despite the school’s withdrawal of the plan, what began as a protest against the LiFE program soon evolved into a bigger movement to criticize the university’s “unilateral” and “money-focused” way of running the institution.

Wednesday’s loosely organized rally began when two students, who hid their faces, lashed out at university president Choi Kyung-hee for unilaterally pushing for projects without students’ consent and mobilizing police against students.

Most of the participants joining the demonstration were seen wearing masks, hats and sunglasses, in an apparent attempt to avoid identification through the media.

“We cannot let president Choi, who threatened students with 1,600 police officers and damaged Ewha’s spirit, head the school anymore,” they said. “We, Ewha students, strongly demand president Choi’s apology and resignation over her undemocratic way of running the school and using violence.”

The school called police on July 30 to bring out five university professors and staff members, who had been locked in the main building for two days due to the sit-in. The move further enraged students, with some of them plastering posters on campus to share their stories of being dragged and injured by police.

“President Choi has pushed for constructing a new pavilion, abolishing scholarships and reducing operation hours of the central library and Prime Project without collecting opinions from students,” they said.

The Prime Project, which grants universities 600 billion won ($545 million) in support over three years, is a scheme to merge majors and restructure colleges. Ewha Womans University won the government fund for the project earlier this year despite students’ protest.

There has also been criticism that Ewha students are defending their reputation by blocking the LiFE project.

“We are not here only to oppose the LiFE college program. We have been disappointed by a series of the school’s unilateral decisions without seeking students’ agreement,” said Baek Young-ha, a senior, at the rally.

“We lack classrooms. We go to a cafe to have study meetings with friends. We have to fight to sign up for classes due to lack of space. But the university spends money on building a pavilion and cafes instead,” she said. “We cannot help but think the university does not care at all about students’ well-being and only focuses on making money.”

Yoon Young-sun, 47, who graduated from Ewha Womans University in the 1990s, came to the protest to support students railing against authority.

“It seems that universities are no longer where people pursue their quest for learning. I am proud of them for taking action,” she said. “I think that this rally itself is different from what we had done decades ago. It seems to be lively rather than aggressive.”

The university maintains that Choi will not step down over the feud. It also said it has begun to work to improve the school’s decision-making system to better consider students’ input. It will also set up a committee -- consisting of students, professors and alumni -- to oversee the process.

The protest soon moved on to other universities. Dongguk University also began a sit-in on Wednesday, set to continue until Saturday, in front of the main building at the university in central Seoul. The students have called for cancellation of a plan to open a night college as well as the resignation of their university’s president.