“Iris-scanning is the safest security technology at the current level. Iris, which is fixed within 18 months to 20 months (since a baby is born), cannot be reproduced,” said Koh Dong-jin, the head of the tech giant’s mobile business, at a launch event for the Galaxy Note 7 in Seoul.

Koh downplayed a recent hacking demonstration of Samsung Pay by security researchers, saying, “That cannot be possibly done in reality because personal information is not saved in Samsung’s smartphones but in a trust zone.”

Rhee In-jong, the head of research and development for software and services in Samsung Electronics, said, “During the demonstration, they took only signals and not fingerprints or biometric information.”

Samsung has partnered with several local banks, including Shinhan Bank, Woori Bank and KEB Hana Bank, for the adoption of iris-scanning technology in their mobile banking services. 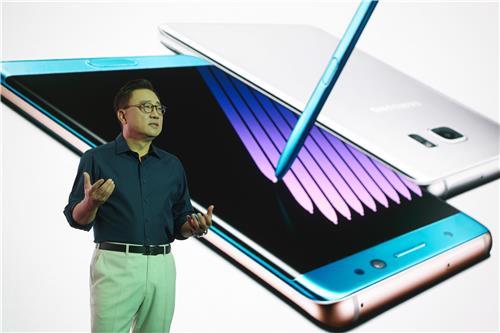 Koh Dong-jin, the head of Samsung Electronics’ mobile business, introduces the Galaxy Note 7 at a launch event in Seoul on Thursday. (Samsung Electronics)
The company said Korean consumers will be able to use iris-scanning to log into websites or when using mobile banking services from Aug. 19. Complicated processes such as certificate verification, one-time password or security cards are expected to be simplified when using mobile banking services, according to the tech firm.

Samsung said it is also in talks with U.S.’ banks including Citibank, Bank of America and the U.S. Bank for the adoption of its biometric technologies.

“It is true that we are reviewing the rollout of a new tablet with 128 gigabyte built-in memory in China because Chinese companies are aggressively doing marketing with high-capacity memory,” Koh said.

“We will accept diverse opinions from various regions and also consider whether that move will disappoint Korean consumers,” he added.

The Galaxy Note 7, which will go on sale in Korea through three mobile carriers on Aug. 19, will come in three colors -- blue coral, gold platinum and silver titanium. A model in black onyx color will be released in early October. Prices start from 988,900 won ($896).