"The South Korean government is concerned about the development of the GCF, which is headquartered in our country," Finance Minister Yoo Il-ho was quoted as saying in a meeting with Hela Cheikhrouhou, the executive director of the GCF, in Seoul. 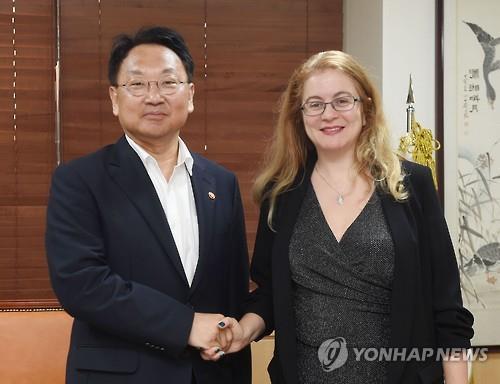 South Korea`s Finance Minister Yoo Il-ho (left) shakes hands with Hela Cheikhrouhou, the executive director of the Green Climate Fund (GCF), in Seoul on Aug. 11. (Courtesy of the Ministry of Strategy and Finance)

"We will continue to support the GCF for its development and settlement in the city of Incheon."

Cheikhrouhou appreciated South Korea's support and contribution to the GCF's resource mobilization and operation since the launch of the GCF in 2013.

The South Korea-based GCF is aimed at leading and overseeing the global campaign to tackle climate change, with the current 17 projects worth a combined $424 million.

The Tunisian who took office in 2013 as the GCF's inaugural chief will finish her three-year term in September. (Yonhap)