According to legal sources, more than 2,000 people expressed their intentions to file complaints against the government-controlled Korea Electric Power Corp, demanding the return of money they paid for bills under the progressive billing system.

Consumers say that KEPCO’s system is unfair as it applies such a cumulative scheme only to household users, not to companies or those registered as business users. Electricity used for industrial purposes, which accounts for more than 50 percent of the nation’s entire power consumption, is not subjected to the cumulative scheme.

Since the 1970s, KEPCO has charged based on a cumulative scheme in which the unit price for electricity increases along with the amount of electricity used.

Under the system, prices are determined in six brackets of which the top and bottom rates differ by 11.7 times. 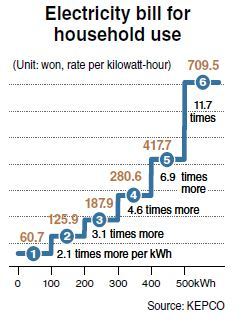 The system has been put at the center of debate each summer. Despite the heat wave, many consumers say they hesitate to use air conditioning in fear of heavy bills.

The system has also failed to reflect the growing electricity consumption and changing lifestyle, they added.

“Power consumption per household has surged along with spending level growing over the years,” said Park Kwang-soo, a senior researcher at Korea Energy Economics Institute said in a radio interview Monday.

“The purpose of implementing such a system in the early years was to support low-income families that consumed less electricity. But it doesn’t work anymore as the level of power consumption by low-income brackets have increased a lot,” he said.

The average household electricity use in 1996 was 163 kilowatt-hours, but that soared to 240 kWh in 2014. The percentage of households that spend more than 300 kWh also surged to 28.7 percent two years ago, according to government data.

The system was adopted in the midst of an oil crisis by the then Park Chung-hee government to cut down on power consumption by imposing higher rates for heavy users. The rationale behind offering cheaper electricity for industrial companies was to encourage their roles in boosting the nation’s economic growth.

In the face of angry consumers, however, KEPCO said it will comply with the court’s decision if they pursue legal actions. But the company has no authority to change the power rate system, a KEPCO official said.

“It is not like we can raise or lower the rates. It is wholly controlled by (government) policy. It is inappropriate to have an opinion about complaints,” he said.