Featuring model-turned-actor Lee Jong-suk and actress Han Hyo-joo, “W” follows the romance that develops between a man and a woman living in two different dimensions, unknowingly “helping each other discover life’s purpose,” according to director Jung Dae-yoon at the press conference held at MBC headquarters in Sangam-dong, Seoul, Monday.

Riddled with doubts about her competence, the female protagonist Oh Yeon-joo, a doctor in her 30s played by Han, finds herself teleporting between reality and an alternate dimension, where she gets involved with the Olympic gold medalist and media mogul Kang Chul, portrayed by Lee. Created by Oh’s renowned cartoonist father, played by actor Kim Eui-sung, the fantasy world began innocently as the artist’s new project titled “W.”

“I feel very lucky and grateful to have received (the drama’s) script,” said Han, who is returning to primetime television after a six-year hiatus. “I’ve been very drawn to this role, and often found myself treating this fantasy situation as if it were real.” 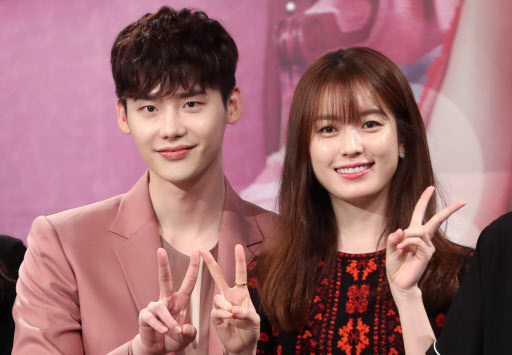 Actors Lee Jong-suk (left) and Han Hyo-joo pose for a photo at the press conference for upcoming mini-series “W” at MBC headquarters in Seoul on July 18. (Yonhap)
According to Jung, “W” is unprecedented and such mixed genre has never been attempted in a Korean drama. Although this may attract viewers out of curiosity, it also comes with its own set of challenges.

“We are planning on including a recap before the start of every episode,” said Jung when asked about the possibility of viewers potentially losing interest due to the constant back-and-forth between the two dimensions. “Also the actors have been great at personifying real-life emotions that people can easily empathize with. I don’t think the audience will have a big issue following the plot.”

Additionally, given the drama’s unique narrative, there is just as much focus on the show’s visual effects as the actors’ performances, both of which lead each other to produce a cohesive product, said Jung.

However, when “W” and KBS’ internationally popular romance drama “Uncontrollably Fond” are set to air simultaneously, the new melodrama may find it harder than usual to attract and retain viewers.

“Rather than thinking of (“Uncontrollably Fond”) as our competitor, it is our priority to focus on self-development and produce the best show we can,” said Han.

Replacing the recently concluded series “Lucky Romance,” “W” will air on MBC every Wednesday and Thursday at 10 p.m., starting Wednesday.