The study, organized by physicians at the Samsung Medical Center, analyzed survey data on some 129,000 Korean teenagers in grades seven to 12 from 2008-2012. Researchers found that among all participants, a total of 2.306 of them have engaged in sexual or romantic encounters with same-sex individuals. They accounted for 0.6 percent of all surveyed teenagers.

The report discovered that gay and lesbian teenagers were more likely to develop "health-risk behaviors," such as drinking and using drugs, as well as mental conditions such as depression, than heterosexual school children. 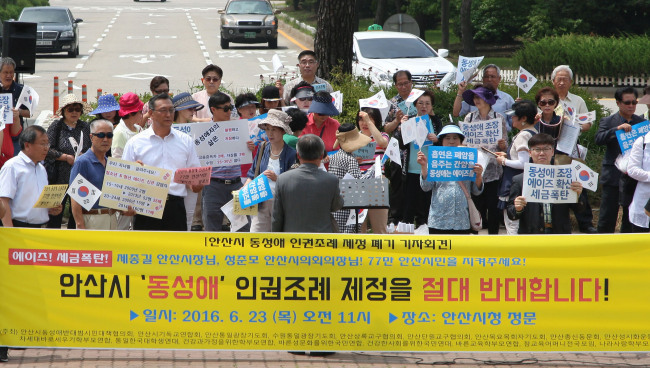 An anti-gay rally is being held in Ansan, Gyeonggi Province last month. (Yonhap)
The proportion of gay and lesbian teenagers who have been exposed to violence was 20.6 percent -- much higher than the proportion for heterosexual students, which was 2.9 percent.

Some 26.4 percent of the gay and lesbian teens also said they have attempted to take their lives at least once, while 7.8 percent of straight teens had the same experience. The study also showed that about 60 percent of homosexual teens have experienced suicidal thoughts and depression, a figure that is almost double that for straight teens.

“Homosexual adolescents report disparities in various aspects of health-risk behavior, including the use of multiple substances, suicide attempts and depressive mood,” researchers wrote in the report. “These factors should be addressed relevantly to develop specific interventions regarding sexual minorities.”

However, Sapo, an LGBT activist at the Lesbian Counselling Center in Seoul, said such research narratives may stigmatize gay or lesbian school children.

“You can still be gay even if you have no sexual or romantic encounters with same-sex individuals and those children have not been included as homosexual in this study,” she said. “I’m worried that people may start thinking all LGBT teenagers have such health-risk problems and behaviors. That’s not always the case.” 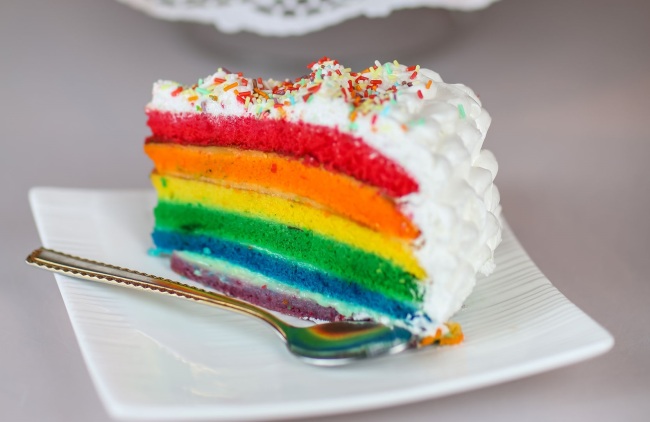 123rf
Yu Sang-geun, another LGBT activist, said he has witnessed many LGBT teens who were either suicidal or clinically depressed. “I also have friends who took their lives,” he said.

He said being a sexual minority can be more stressful for teenagers, as they still need to depend on adults -- who may not accept their queer identity -- both financially and emotionally.

“It’s a combination of many different things,” he said. “Sometimes you want to come out of the closet but your family members are very homophobic. Some teens are stressed about and fear the possible consequences of coming out. Others feel guilty and feel sorry for their parents. All of these things can be overwhelming.”

Yu stressed that it is not homosexuality itself that makes LGB teens vulnerable to substance abuse and suicidal thoughts. “It has to do with the constant discrimination that they face, as well as the sense of isolation and helplessness (that fuels anxiety and other stress-related health conditions),” he said.

Homosexuality still remains largely taboo in South Korea, where almost 30 percent of the population is Christian. According to a 2013 research jointly conducted by a local daily and the Asan Institute for Policy Studies, among 1,500 Koreans who participated, 78.5 percent said they objected to homosexuality. Only 21.5 percent of the participants said they did not feel “uncomfortable” with it.

Last year, the country‘s Gender Ministry was criticized by a group of activists for ordering the Daejeon Metropolitan City to scarp articles that guaranteed LGBT rights in the city’s newly revised charger of gender equality.

Meanwhile, the same study by the SMC found that 34 percent of all surveyed straight students have engaged in sexual relationships in the past.