[ The Korea Herald – Send E-mail ]
Park arrives in Seoul after five-day trip to Mongolia
By KH디지털2
Published : Jul 18, 2016 - 13:33
Updated : Jul 18, 2016 - 17:26
President Park Geun-hye arrived in Seoul on Monday after wrapping up her five-day trip to Mongolia that focused on strengthening international cooperation in coping with North Korea's nuclear and missile threats and promoting free trade.

During her first presidential trip to Ulaanbaatar, she attended the two-day Asia-Europe Meeting, which ended Saturday, and then began a two-day official visit, which was arranged on the invitation of her Mongolian counterpart Tsakhiagiin Elbegdorj. 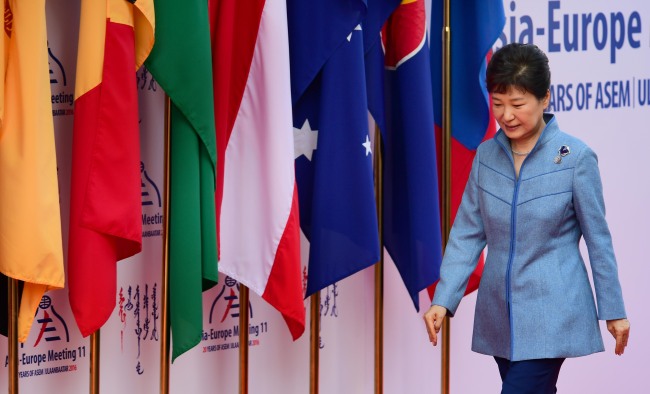 President Park Geun-hye attending the Asia-Europe Meeting in Ulaanbaatar on July 15. (Yonhap)
At the ASEM summit, Park held official and unofficial meetings with the leaders of the European Union, Laos, Vietnam, Cambodia, the Czech Republic, Bulgaria, Japan and other countries, which Seoul officials said helped "deepen and widen" South Korea's diplomacy with Asia and Europe.

Park, in particular, revved up her summit diplomacy to call international attention to Pyongyang's persistent military provocations and its woeful human rights situation, and promote her policy for national reunification.

At home Park faces an array of important challenges such as revitalizing the economy and addressing resistance to a plan to deploy an advanced U.S. antimissile system in a southern town to better deal with North Korea's evolving nuclear and missile threats.

The residents of Seongju County in North Gyeongsang Province have opposed the decision to install a Terminal High Altitude Area Defense system in the county.

They are concerned over rumors that electromagnetic waves emanating from the THAAD radar system could cause cancer and infertility and hurt their agricultural crops. They have also criticized the government for pushing ahead with the deployment plan without the due process of securing their consent.

Before departing for Mongolia, Park convened a session of the National Security Council and called for an end to "needless" squabbling over the deployment of THAAD and for public understanding over the "grave" security situation the country is in at the moment.

While in Mongolia on Saturday, Park reiterated her call for public understanding and cooperation in ensuring national security, pointing to "many difficulties" arising from the decision to deploy a THAAD battery to Seongju. (Yonhap)