Police said Saturday it has opened a full-fledged investigation into the confinement of the prime minister during his visit to the southern town of Seongju to persuade residents to accept the deployment of an advanced U.S. missile defense system to the area. 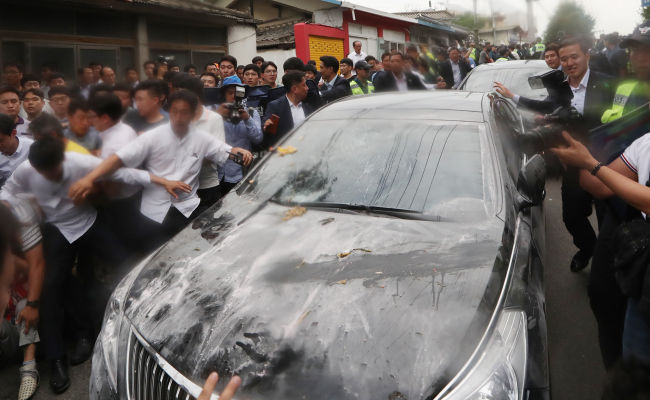 Prime Minister Hwang Kyo-ahn attempts to get through angry crowds in a car in Seongju on Friday. (Yonhap)
Police said despite the sensitivity of the issue, they must launch a criminal probe into any violent act. The investigation will focus on whether water bottles and eggs can be considered "hazardous tools" or the demonstrations by the crowd broke relevant laws.

Residents of Seongju, located 296 kilometers south of Seoul, staged protests since early this week after the government said it plans to deploy the THAAD system there.

The trip was an attempt to alleviate concerns that residents may have had about health issues related to the missile system's powerful radar and questions raised about the fairness of the government's decision-making process. (Yonhap)