The investment is expected to forge a strategic partnership between Samsung, which also produces semiconductors and liquid-crystal displays for cars, and BYD, according to the source. 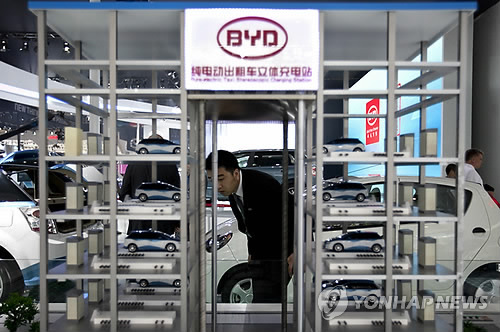 The Chinese unit of Samsung will buy new shares of BYD when the Chinese carmaker launches a rights offering.

If the rights offering is completed as early as next week, Samsung will own about 2 percent of BYD shares, according to the source.

Samsung has supplied semiconductors and liquid-crystal displays to BYD. The investment is expected to allow Samsung to expand shipments of such parts to the Chinese company, the source said.

An official at Samsung Electronics, who spoke on the condition of anonymity, said discussions for the investment on BYD have been under way for about one year.

"The main purpose of this cooperation is to strengthen our semiconductor business for electric cars through a partnership with BYD," the official said. (Yonhap)