[ The Korea Herald – Send E-mail ]
Korea to tighten asbestos controls
Concerns remain over extensive number of buildings with asbestos, high reconstruction costs
By Korea Herald
Published : Jul 14, 2016 - 16:45
Updated : Jul 14, 2016 - 17:46
The government is set to strengthen the management of buildings with asbestos during their dismantling and reconstruction process to minimize health risks from exposure to the material.

Asbestos were widely used in 1970s to build slate roofs, interior materials, soundproof walls and insulators at low costs. It is defined as a carcinogen by the World Health Organization, as exposure to worn out asbestos materials can cause diseases such as lung cancer and mesothelioma.

The revised Asbestos Safety Management Act, which will take effect on Aug. 15, regulates an owner of a building with asbestos to have at least one safety supervisor at dismantling sites. Sites of over 2,000 square meters must have more than one expert.

The current law already states that a safety supervisor -- chosen by a landlord -- needs to undergo six hours of safety education, keep track of the asbestos status of a building and see that instructions are followed to dispose asbestos waste after it is completely sealed.

In 2009, South Korea banned the manufacturing, import and use of construction materials that include over 0.1 percent of asbestos. The measure came after 482 residents living in Hongseong County, South Chungcheong Province, where several asbestos mines are located, developed related illnesses.

The related Asbestos Injury Relief Act was implemented in 2011.

Despite the ban, there are still a large number of buildings that contain asbestos in the country, posing health threats to citizens amid the frequent redevelopment and reconstruction of such buildings. 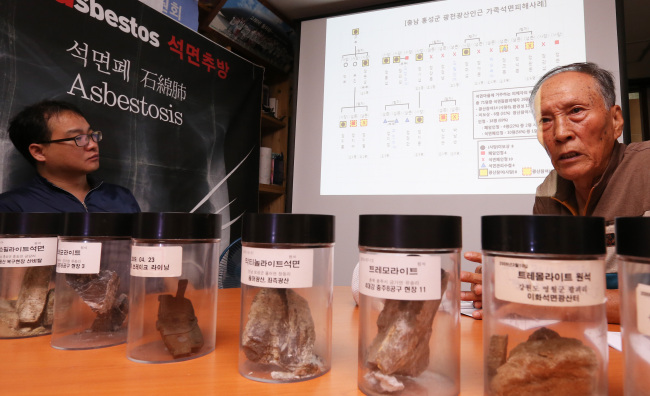 An asbestos victim speaks during a press conference on damages suffered by asbestos victims at the Asian Citizen’s Center for Environment and Health in Seoul on July 5. (Yonhap)
According to Seoul Metropolitan Government data, a total of 3,456 buildings in the capital are designated as buildings with asbestos, as of 2016, as they have used asbestos cement in the construction of ceilings, walls and partitions.

The data also shows that out of all school buildings in the city, 78 percent were made with asbestos, while 50 percent of public facilities , 35 percent of senior centers and day care centers are built with materials that contain asbestos. Public facilities include subway stations, libraries, hospitals, supermarkets, hotels and department stores.

“Exposure to fine particles of worn-out asbestos materials or during reconstruction can lead to health risks such as respiratory or lung disease. That is why it is very important to make sure dismantling or removal of asbestos are done in sealed areas,” Lee Seung-bok, a professor of Architectural Engineering at Yonsei University told The Korea Herald.

“Like other developed countries which have used a large amount of asbestos in the past, using asbestos has not been a big deal,” he added.

Although there has been no rapid increase in asbestos-related illnesses here so far, such illnesses are expected to increase due to a large amount of asbestos used in the past four decades and the long latency period, said Choi Ye-yong, the head of the Asian Citizen’s Center for Environment and Health.

Choi also underlined that there is a lack of specialized organizations for asbestos analysis and experts to diagnose and treat asbestos-related illnesses in Korea.

According to the ACCEH, a total of 2,184 victims were recognized as having suffered damages from asbestos-related diseases by the government, as of this month, since 2011.

Costly expenses for the dismantling or reconstructing buildings with asbestos is also cited as a problem.

According to Seoul City, a removal of asbestos materials used to build Jamsil Sports Complex would cost at least 3 billion won ($2.64 million).

“(In order to reduce risks from buildings with asbestos in the city,) we are currently filing health risk assessments on those worn-out asbestos buildings and handing out safety manuals to landlords to urge them to remove or reconstruct asbestos buildings,” said an official from the Life Environment department from the Seoul City.

In 2014, the Incheon Metropolitan City office of Education started a project to remove asbestos materials from 373 public schools. By last year, at least 200 million won was put into the removal process at 48 schools. The IMCE said that at least 65 billion to 130 billion won is needed to complete the removal of asbestos from all schools in Incheon, calling for expanded government budget.