The Ministry of Environment said Monday that it will ban sales and cancel the certification of approximately 79,000 disputed Volkswagen models sold here, if the suspected cheating on its authentication tests is proven.

The ministry said Monday that it has received from the Seoul Central Prosecutors’ Office a list of 32 types of diesel and gasoline models of Volkswagen vehicles -- including the VW Golf and Audi A8 -- that are suspected to have fabricated reports submitted to the National Institute of Environmental Research.

The decision follows the prosecution’s investigation earlier this year on suspicions the company had forged test results for its vehicles’ noise-level, fuel efficiency and emissions to receive authentication.

If the German carmaker’s alleged irregularities turn out to be true, about 61,000 diesel and 18,000 gasoline Volkswagen vehicles sold here since 2007 will be affected, according to the ministry statement. 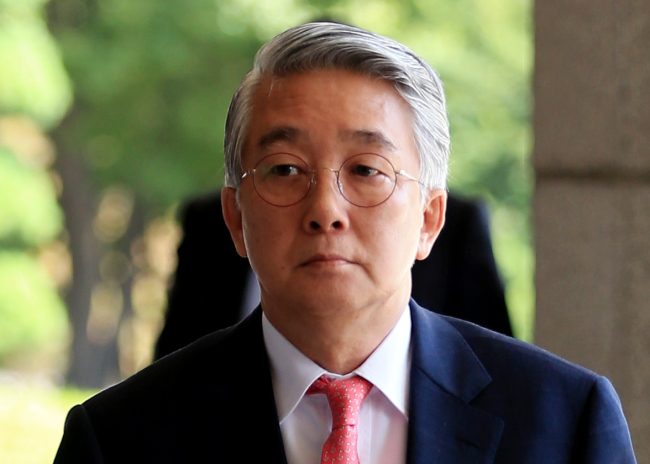 Former Volkswagen Korea’s managing director Park Dong-hoon enters the Supreme Prosecutors’ Office after he was summoned again for questioning on Friday. (Yonhap)
“We are currently reviewing the list of disputed models and settling exact dates for the further process,” said an official of transportation policy at the Environment Ministry.

The ministry said it would cancel certification of those models in two weeks when the prosecution result is announced. It also plans to hear an explanation from Volkswagen Korea on July 22.

“There is no concrete plan on how to respond to the ministry request as of now. We expect the prosecutors’ investigation result will come out at the end of July,” Kim Ki-hoon, the director of the Korean unit of Volkwagen told The Korea Herald.

“We will then come up with plans and solutions on how to cooperate with the prosecution and the ministry’s request on recall plan,” he added.
Volkswagen AG’s Korean unit has been the center of criticism for not following the ministry’s earlier recall order.

Last November, the ministry had ordered the recall and suspended sales on 126,000 vehicles of 15 Volkswagen models -- including Tiguan, the best-selling foreign car here in 2015 -- for emissions manipulation.

Following the order, Volkswagen AG’s Korean unit had submitted recall measures in January, March and June, but these were all rejected by the ministry as there had been insufficient information and a lack of details on improving emissions.

The ministry said the company did not admit to using a defeat device to trick emissions test.

On Friday, former Volkswagen Korea managing director Park Dong-hoon was summoned again for questioning regarding the emissions rigging. Park reportedly argued that he had no authority to give such orders.