“China’s slowing growth by itself is a negative for Korea, given Korea is exposed to Chinese domestic demand, supply chains, and the same global factor impacting China – sharply slower growth in global trade,” Jackson said in a recent interview.

The world’s second largest economy has been restructuring its market to focus more on generating growth through services and innovation, rather than through heavy industries such as steel, machinery and cement. 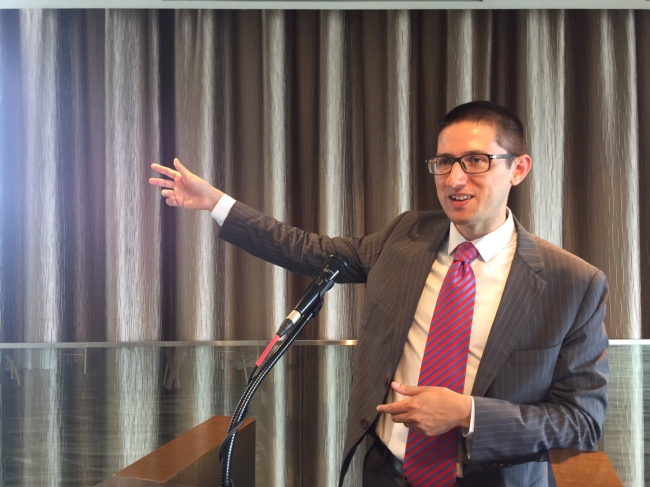 Brian Jackson / IHS
This supply-side economic restructuring comes as China is not only facing environmental challenges from the rapid rise of manufacturing and brick-and-mortar businesses, but also demographic changes.

With increasing debt and an aging population, Jackson said China is on a similar path as Japan, with two main differences -- the level of urbanization and policy commitment.

“Another thing is that Japan had a policy uncertainty, and unwillingness to resolve the debt issue in a quick and decisive way. China does not have this problem at all. The government is going to see what is going on and solve this as quickly as possible.”

IHS forecast that China will grow 6 percent over the next decade, and this will slow to below 4 percent by 2030, but is unlikely to fall below 3 percent by 2040.

“If China grew 10 percent three years ago to 4 percent by 2030 -- that is a huge slowdown. If you look at the shape of that, that is similar to the Japanese slowdown,” Jackson noted.

Even after it restructures and develops into a new economy, and matures and grows in the 3 percent range by 2040, China would still relatively be a developing economy.

“More clearly, China will be an upper middle income economy then, but (it is) still going to be far, far behind the U.S. China would have to continually grow 7-10 percent for decades to catch up with the U.S.,” he said.

“The U.S. is going to keep on growing. It is growing 2-3 percent on average annually. The problem is that China is chasing a moving target.”

The primary silver lining in China’s slower growth outlook is that it will need to become more focused on productivity growth, rather than just raw investments, he said.

“These issues provide a potential opportunity for Korea. China is increasingly opening its economy to foreign investment as it hungers for new productivity drivers,” Jackson said, noting that China is pushing aggressively to sign new trade and investment agreements, while upgrading its existing ones.