[ The Korea Herald – Send E-mail ]
[Weekender] KATUSA, symbol of Korea-U.S. alliance
By Yoon Min-sik
Published : Jul 8, 2016 - 17:05
Updated : Jul 8, 2016 - 17:05
They were there in 1950 when the U.N. troops landed in Incheon to besiege the North Korean Army during the Korean War. They were there when the allied forces pushed North Korea to the brink at the Yalu River, only to be pushed back by massive forces of China.

Over half a century later, soldiers of the Korean Augmentation to the United States Army are still here to serve as an integral piece of the South Korea-U.S. alliance.

KATUSA is a group of to South Korean soldiers augmented to the 8th U.S. Army in order to support their mission here. There are currently 3,444 South Korean servicemen living and working with U.S. troops from Camp Walker in Daegu to Camp Stanley in Uijeongbu, Gyeonggi Province.

The branch does not consist of an individual unit, but its members are dispatched throughout the 8th Army’s departments. Their role comprises of 14 types of posts, varying from combat, interpretation and medical assistance to military police. 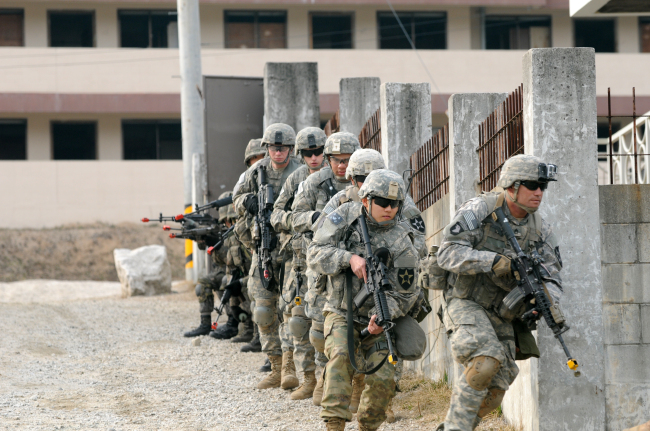 While KATUSA does not recruit exclusively male soldiers, the overwhelming majority are men, as most KATUSA personnel are conscripted soldiers. As South Korea only conscripts men, women only serve by voluntarily joining the Army as a career.

“KATUSA doesn’t necessarily have a quota or recruiting process exclusively for women. But it sends out a notice when there is an opening, and male or female officers in Korean military can apply for it,” explained an Army officer. He or she would go through interviews and various processes to verify one’s competence. There is currently one female noncommissioned personnel and administration officer working for KATUSA.

According to the military, the U.S. military does not operate a similar type of military branch with any other ally, which it claims is a mark of the Seoul-Washington alliances’ strength. Officials said that the USFK has asked for the number of KATUSA forces to be expanded each year.

The KATUSA program dates back to the dawn of 1950-53 Korean War. Gen. Douglas MacArthur of the U.S. Army -- then leading the U.N. Command -- requested a dispatch of Korean soldiers to the U.S. Army to address shortages, to which South Korea’s inaugural President Syngman Rhee agreed.

The first-ever KATUSA soldiers were assigned to the 7th Infantry Division in Japan, where they underwent basic training before being deployed to forces preparing the famous amphibious mission at Incheon. They stood by the U.S. troops during the key battles of the Korean War.

According to Yu Yong-bong, one of the first KATUSAs, they assisted the U.S. soldiers with their knowledge of local terrain while helping to avoid miscommunication between the U.S. forces and Korean citizens and servicemen.

The program continued after the war as a training base for South Korean military’s technical MOS, or military occupational specialty. During this period, a KATUSA soldier would spend up to 18 months learning and return to one’s original division.

This practice ended in 1968, after which KATUSA soldiers would spend their whole military tour in the U.S. Army.

After receiving five weeks of basic training at the Korea Army Training Center, KATUSA soldiers are sent for another three weeks of training at the KATUSA Training Academy at Camp Jackson in Uijeongbu, Gyeonggi Province. During this time, they go through physical training while receiving lessons about American culture and language.

Based on their academic backgrounds and English abilities, they are assigned to posts where they will spend the rest of their 21-month service period.

Because they have the chance to use English on a daily basis and receive a higher quality of welfare programs, KATUSA posts are highly coveted by men about to commence their mandatary military service.