According to the sources, STX Offshore is close to axing its contract to build four ships with Frontline Ltd., the world's largest oil tanker shipping firm. 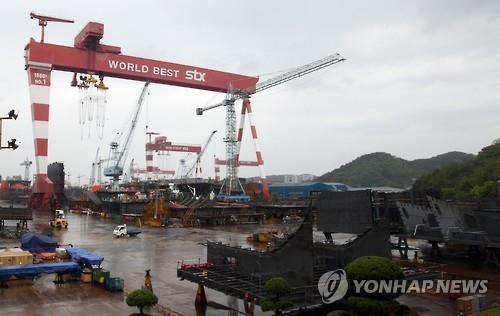 Also, STX Offshore is in talks with another customer to nix an order contract to build three ships, the sources said.

Last month, a local court approved a filing by financially shaky STX Offshore to be put under a court-led restructuring scheme, paving the way for the shipyard to avert liquidation.

The shipbuilder has been under the control of its creditors since April 2013 amid a protracted slump in the shipbuilding sector.

Despite over 4 trillion won ($3.36 billion) in financial aid from its creditors, the shipbuilder logged an operating loss of 314 billion won last year following a loss of 1.5 trillion won the previous year.

STX Offshore & Shipbuilding was affiliated with the now-defunct STX Group that had a business portfolio that ranged from construction and shipping to shipbuilding and energy.

It is one of the local shipyards that have been suffering massive losses due to delays in the construction of offshore facilities and an industry-wide slump. (Yonhap)