The report exposed a case of a Chinese tourist allegedly being overcharged by a clinic in the cosmetic surgery mecca of Gangnam, Seoul. CCTV argued that Chinese patients are typically charged from two to 10 times higher than locals, leading them to eventually stop visiting Seoul for cosmetic surgery.

Lured by the beauty of Korean celebrities and in search of trendy and professional surgeons, a total of 36,224 foreigners received cosmetic surgeries in Korea in 2014. About 56 percent, or 20,480 of them, chose clinics in Gangnam, according to the Ministry of Health and Welfare.

However, those clinics are seeing a downturn in patient numbers. The Ministry’s data showed the number of foreign patients was 12,000 in 2015, a fall of 40 percent from 2014.

While many of the clinics attributed the shrinking number to the outbreak of the Middle East respiratory syndrome last year, experts say the dwindling number of Chinese customers -- the biggest proportion of foreign patients -- is chiefly because of their falling satisfaction.

“I deem the number of Chinese patients visiting Gangnam for cosmetic surgery to have dropped by as much as one-third,” a woman who wished to remain anonymous told The Korea Herald. She runs a pharmacy in a clinic-filled street in Apgujeong-dong in Gangnam and added that this trend has been taking place over the last two years.

She pointed out that many of the tourists, who typically have trouble communicating in Korean, were often exposed to illegal brokers and were overcharged. 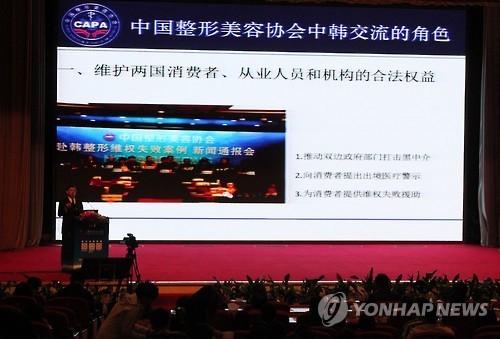 A speaker talks during a forum hosted by the Korea Health Industry Development Institute and China Cosmetic Surgery Association in Shanghai, China on April 23. The forum was held to ease negative public sentiment among Chinese patients who often deal with problems such as illegal brokers, unqualified surgeons and excessive commissions. Yonhap
“When a Chinese patient pays a commission fee to a broker, the operation cost would have to go down,” she said. “Because the operation cost is low, the surgery will be undertaken by an intern surgeon or even an unqualified doctor, which leads to frequent medical malpractice,” she added.

Experts said that the industry’s lax regulations towards medical practitioners, such as lack of emergency training or proper equipment, have begun to affect Seoul’s reputation as a top medical tourism destination.

A Chinese tourist was pronounced brain-dead last year during a cosmetic surgery operation. Such tragedies have prompted warnings of possible complications that can occur from such surgeries to be circulated online and via social media in China.

Upon investigation, it was found that her surgeon did not have a proper medical license and the clinic had employed brokers to cajole foreign tourists to receive surgery at the clinic.

“There is currently no regulation or standard that supervises and checks the status of facilities and equipment at private clinics,” Kwon Young-dae, a board-certified doctor who runs a cosmetic surgery clinic in Gangnam and director of public relations for the Korean Board of Plastic Surgeons, told The Korea Herald. He explained that for a cosmetic surgery clinic, a simple set of operating equipment, sterilizers and a surgery room would be sufficient to operate.

Under the current Medical Service Act, nonspecialist or general doctors can open practice of any service with due facility and equipment. Up until 2007, general practitioners when opening their practice had to abide by a set of rules, specifying their area of service to differentiate them from specialists. The regulations, however, have since been eased.

Kwon added that such a legal loophole has led to exaggerated advertisements and doctors trying to attract patients more through marketing than professionalism.

Analysts see there are roughly 10,000 nonspecialist doctors in Korea performing plastic surgery, while board-certified plastic surgeons are much fewer, at around 2,000. After getting a medical degree, they must take training courses, do a one-year internship and four years of plastic surgery in order to receive the certification.

Chinese patients are usually not aware if their doctors are board-certified or not.

Faced with a myriad of issues that may compromise the health and safety of patients, the South Korean government vowed in April to take steps to support foreign patients to check what procedures they receive and how much they should pay. The government said that in doing so, it would target a million foreign patients and 2.9 trillion won ($2.5 billion) in medical revenues by 2020.

The Ministry of Health and Welfare said it would allow foreign patients to reclaim 10 percent of value-added tax. The ministry also capped the commissions that agents can charge, in order to avoid illegal brokers affecting the fixed surgery cost.

However, industry insiders say it will still be difficult to fully guarantee patients visit reliable clinics.

“We cannot fully guarantee that all cosmetic clinics we are partnered with operate surgeries under certified doctors. It is actually difficult to monitor all of them,” said an official from the government-run Gangnam Medical Tour Center, which opened its doors in 2014 to connect foreign patients with the safest clinics in Seoul.

“Monitoring brokerage agents is even more difficult, because they will appear anyway in different form,” she added.