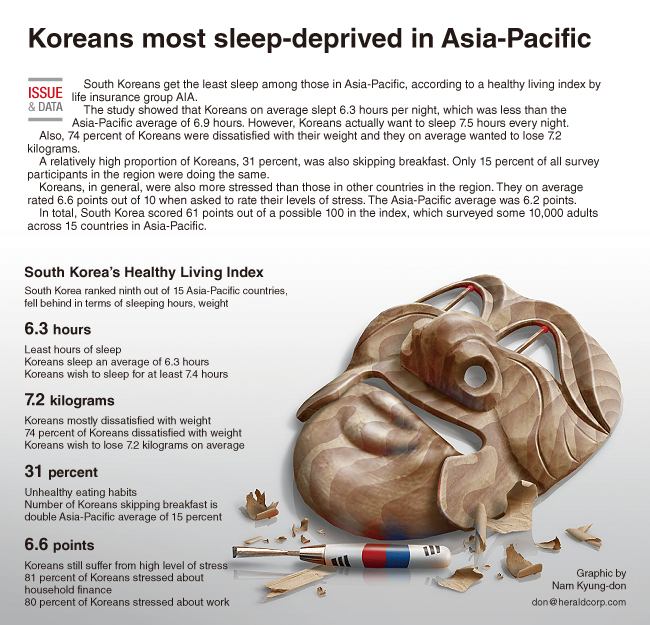 South Koreans get the least sleep among those in Asia-Pacific, according to a healthy living index by life insurance group AIA.

The study showed that Koreans on average slept 6.3 hours per night, which was less than the Asia-Pacific average of 6.9 hours. However, Koreans actually want to sleep 7.5 hours every night.

Also, 74 percent of Koreans were dissatisfied with their weight and they on average wanted to lose 7.2 kilograms.

A relatively high proportion of Koreans, 31 percent, was also skipping breakfast. Only 15 percent of all survey participants in the region were doing the same.

Koreans, in general, were also more stressed than those in other countries in the region. They on average rated 6.6 points out of 10 when asked to rate their levels of stress. The Asia-Pacific average was 6.2 points.

In total, South Korea scored 61 points out of a possible 100 in the index, which surveyed some 10,000 adults across 15 countries in Asia-Pacific.

South Korea ranked ninth place, along with India, Singapore and the Philippines. China topped the chart by scoring 72 points, followed by Macau and Vietnam, which scored 70 and 67 points respectively.