The chief of South Korean business group Lotte won support of Japanese shareholders of Lotte Holdings, the group's de-facto holding company, in a vote on Saturday, cementing his grip on the retail giant currently embroiled in the slush fund scandal in South Korea.

The shareholders' meeting was held at the request of Shin Dong-joo, the former vice president of Lotte Holdings and the elder brother of the incumbent chief. 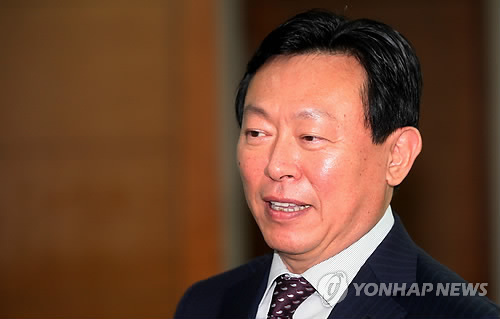 Lotte chairman Shin Dong-bin (Yonhap)
The first son of Lotte founder Shin Kyuk-ho has repeatedly called for the dismissal of Dong-bin and Lotte Holdings President Takayuki Tsukuda from the post of company director over the past year.

Dong-joo has claimed that he himself is his 93-year-old father's hand-picked successor, but Dong-bin has argued that his father, who is now hospitalized for various illnesses, is unable to make reasonable judgments due to mental health problems.

Dong-bin prevailed in two previous shareholders' meetings, including one in March that cemented his hold on Lotte in a power struggle with his elder brother.

Hotel Lotte, one of the group's key affiliates, initially slated for June as well as a series of mergers and acquisitions.

The IPO of the hotel and duty-free operator was the key reform pledge the Lotte chairman has made to improve the murky governance structure of the business empire following an acrimonious succession battle with his elder brother.

Lotte officials are under suspicion of receiving kickbacks in return for giving space to a local cosmetic company. (Yonhap)