[ The Korea Herald – Send E-mail ]
[EYE] ‘It comes down to IT going green’
Greenpeace urges shift in energy paradigm to fight climate change
By Kim Da-sol
Published : Jun 24, 2016 - 18:26
Updated : Jun 24, 2016 - 18:26
Gary Cook, a senior IT analyst at Greenpeace, said that he has noticed a particular trend among the younger generation in the United States -- they delay getting their driver’s license after they turn 20.

“It’s interesting. America, very much defined by car culture, is seeing lowering importance of getting a car. An interesting shift over the last five years,” Cook said in an interview with The Korea Herald.

He explained that many drivers in the U.S. are choosing electric vehicles as the first option, wanting to move away from gasoline and fossil fuels, as they recognize the impact when they switch the transportation mode.

Amid the fast-changing consumer attitude for greener options, big names such as Facebook and Google are also contributing to the environment-friendly movement. 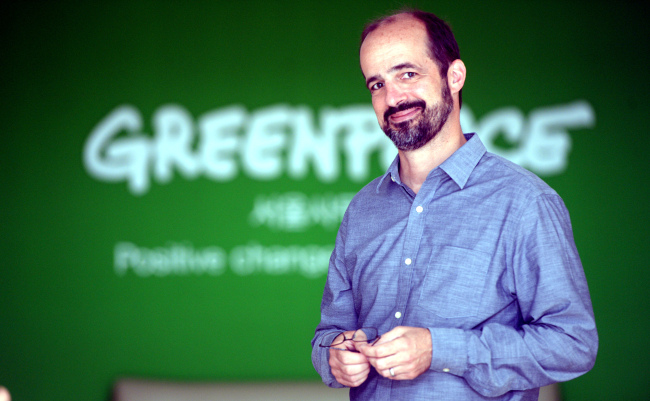 Gary Cook, a senior IT analyst at Greenpeace, poses during the interview with The Korea Herald. (Park Hyun-koo/The Korea Herald)
Greenpeace has initiated the “Cool IT Campaign,” urging IT companies to adopt renewable energy and power technological solutions in order to fight climate change. At least 16 companies including Facebook, Google Softbank, Apple and eBay have been participating in this campaign since 2011.

According to a Greenpeace report, when IT companies mitigate their own carbon footprints, they can deliver approximately 7.8 gigatons of equivalent carbon dioxide emissions savings by 2020.

By improving energy efficiency in power transmission and distribution in buildings and factories as well as in the use of transportation to deliver goods, these companies can also deliver carbon savings five times larger than the total emissions from the entire IT sector by 2020.

What the campaign asks for is simple. It recommends companies to break the cycle in which “computing is in the cloud, the cloud is driven by data centers and these data centers are overwhelmingly powered by dirty coal-fired plants.”

“We asked these companies, look, you’re incredibly innovative company, changing the world, but your current growth with your data center investments are in fact increasing demand for coal,” he said.

Last year, Naver also joined the move as the first Asian company to do so.
“Naver is the first Asian company to commit to be 100 percent powered by renewable energy among IT companies. But we still need policies to open the market first and you also need policies to help the drive of the use of renewable energy at scale,” added Cook.

Greenpeace data in 2013 showed that an average datac enter in Korea consumes at least 2.6 billion kilowatt-hour per year. This figure is a fivefold rise from 2006, since at least 50 million users are enjoying the perks of speedy Internet in the wired country. Korea is the second largest country in the world to produce the largest traffic, followed by the United States, as of 2013.

Cloud computing, for all its virtual advantages, relies on brick-and-mortar data storage infrastructure. Thanks to this, individuals can store unlimited media instead of filling up hard drives, but electricity consumption required to power the cloud is soaring. And the overwhelming source is coal.

According to Jude Lee, a senior climate and energy campaigner at Greenpeace Korea, that is why the way these companies provide services is becoming significant.

“If they are providing services by killing our earth that we are standing on, they are going the opposite of their industry philosophy. So, that’s why most of the IT sectors agree with using renewable energy,” said Lee. 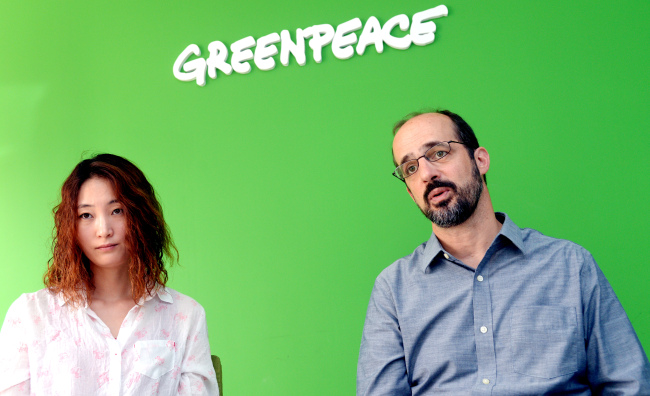 “That race is starting to spread to other sectors, where renewable energy is becoming a critical part of not only for brand identity, but also the smart business,” Cook said.

But Cook stressed that the current government lacks a holistic view in viewing the whole energy system in Korea.

“You are beginning to see some movement, but the policies are far behind,” said Cook.

“Policies in the U.S. have been really pushing toward the targets, maybe utilities have initially resisted that move, but now they actually showed they can meet the goal so the municipalities are gradually raising the target,” he added.

“Policies matter a lot. Both Korea and U.S. have IT sectors and we see that they are driving the movement and now, how they define innovation is being increasingly defined by how much green energy they use,
“Ultimately it needs leadership in the beginning, to get moving,” added Cook.

Amid mounting worries over fine dust here, Cook said that one of the biggest contributing factors comes from coal-fired power plants.

In South Korea, there 53 coal power plants predominantly located in the Chungcheong-do area. In order to meet expanding demand for electricity, the South Korean government recently proposed to build at least 20 more coal-fired power plants by 2030.

“From an environmental perception, we cannot afford more coal fired power consumptions. In U.S., we are actually shutting down coal plants,” said Cook.

According to an article on Guardian published earlier this year, America’s use of coal for electricity dropped to its lowest point on historical record in 2015 – it accounted for just 34 percent of U.S. electricity generation last year, the Sustainable Energy in America data was quoted as saying. In 2014, coal made up 39 percent of electricity supply.

Coal has been long defined as the dirtiest of fossil fuels and America’s biggest single source of climate pollution.

“Coal is no longer a part of the question. No one is proposing new coal plants in the U.S. It is question of which ones are going to be shut down in what order,” added him.

He added that not only big companies but also individuals can contribute to make the world greener.

“Solar has been a huge growth in many parts of the U.S., as consumers can install solar panels with the least payment as companies will come and change them regularly according to regulation,” he said.

In the same vein, Lee also underlined the importance of the power that consumers have.

“Consumers have a lot of power. They can send strong messages and signals to companies which operate in unsustainable ways,” she said.

“We -- as informed digital citizens -- have the power to demand IT move away from dirty energy, embracing renewables instead,” she added.