A latest report from the Organization for Economic Cooperation and Development has sent a solemn message to the world: If we do not effectively tackle air pollution, it could cause 6 to 9 million premature deaths and economic consequences of $2.6 trillion annually by 2060.

South Korea was among countries singled out as those in greater danger. The report said that South Korea could see at least 1,109 early deaths per 1 million people in 2060 -- the only OECD member to exceed the 1,000 mark -- unless the country makes significant efforts to prevent air pollution.

The premature death rate for Australia and New Zealand for the same year was projected to be only 95 early deaths per 1 million people, just 8.6 percent of South Korea’s figure.

Other than South Korea, India and China was also predicted to see the biggest rises in mortality rates from air pollution, due to rising populations and exposure to emissions from factories and traffic. 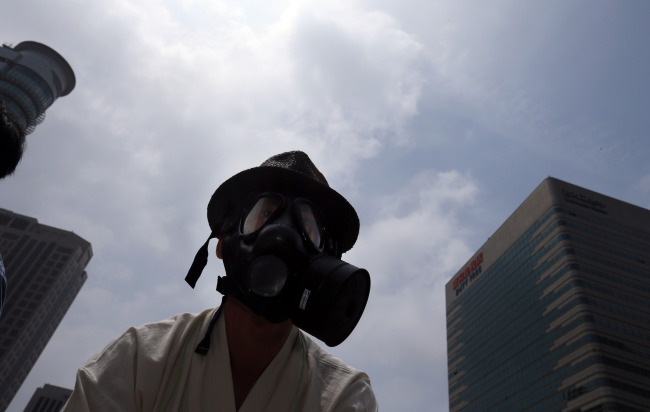 An activist wearing a oxygen mask hold a performance calling for all-out measures to fight against air pollution in Seoul. (Yonhap)
The report also highlighted that increasing health costs and decreasing labor productivity will have the biggest impact on gross domestic product loss. Countries like China, Russia, India and Korea will be hit hardest by GDP losses, it added.

Air has improved at a stagnant pace since then, with air quality remaining poor compared to other advanced nations.

Experts say that the high density of fine dust in South Korea derives from its high population density and rapid industrialization, as well as the impact of geographical proximity with China. Major domestic culprits include emissions from vehicles and coal-fired power plants.

Other causes also come from the meteorological characteristics of the country, such as precipitation being concentrated during summer, making it harder for fine dust to be washed out. Frequent formation of high atmospheric pressure also leads to air stagnation.

“The number of lives cut short by air pollution is already terrible and the potential rise in the next few decades is terrifying,” said OECD Environment Director Simon Upton in the latest report.

“If this is not motivation enough to act, this report shows there will also be a heavy economic cost to not taking action. We must prevent these projections from becoming reality,” he added.