It took five to seven months to prepare the body for the funeral. It required that the country’s top pungsu -- or Korean geomancy -- experts choose an ideal burial site. And thousands of workers were recruited to construct the tomb and carry the body to the burial site.

Such lesser-known facts about kings’ deaths and the complex funeral procedures of the Joseon era (1392-1910) are revealed at the new exhibition “Royal Tombs of the Joseon Dynasty,” which runs at the National palace Museum of Korea until Aug. 28. 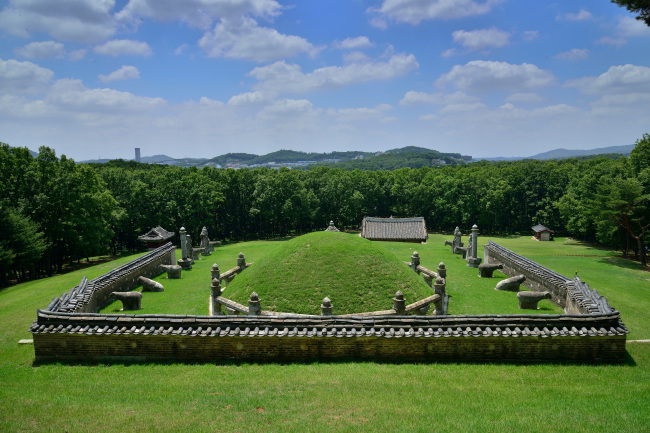 Geolleung, the tomb for 22nd King Jeongjo and his wife Queen Hyoeui, in Hwaseong, Gyeonggi Province. (The National Palace Museum of Korea)
The show also sheds light on the 40 royal tombs of Joseon that are scattered over 18 locations in Seoul and its outlying areas. There are also two royal tombs in North Korea. The 40 royal tomb sites in South Korea were listed as UNESCO World Heritage sites in 2009.

In an effort to preserve them in their original state, Joseon’s royal tombs have never been excavated. Hence, most of the exhibits are old documents and drawings that served as guidelines for kings’ funerals during the Joseon era. But there are some rare objects, including a king’s coffin that was never used and items found in burial sites such as porcelain and containers used during ancestral rites.

The preparation for a king’s death and his funeral began long before his death. When a prince ascended to the throne, his coffin was made immediately, in that year. Each year, layers of lacquer paint was applied on the coffin, which gradually hardened it.

“We don’t know why they made a coffin for the new king right away, but I think it is because they wanted to put in extra care for the king,” said Park Su-hee, the curator of the exhibition, at the press preview of the exhibition Monday. 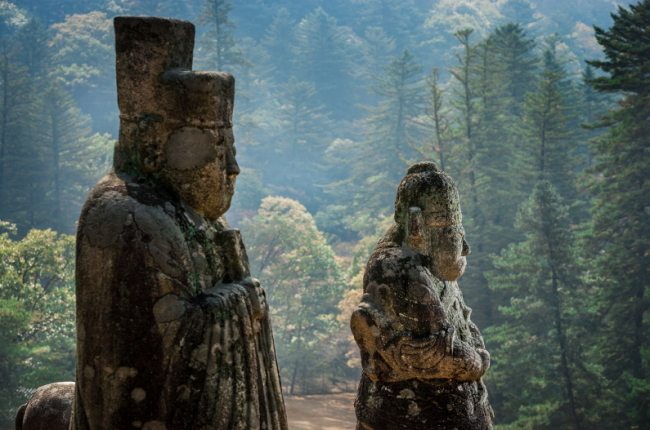 Stone sculptures stand guard at Gwangneung, the tomb for 7th King Saejo and his wife Queen Jeonghee, in Namgyangju, Gyeonggi Province. (The National Palace Museum of Korea)
When a king died, his servants placed a cotton ball between his upper lip and nose to ensure that the king had indeed passed away. After the death is officially announced, his servants bathed the body in a tub. They washed the king’s hair with water obtained from boiling Korean birch wood and rice water, and cut his fingernails and toenails, placing them in the pockets of his inner clothes. After they put rice and a pearl inside his mouth, the body was ready to be placed in the coffin.

The king’s sons fasted for three days while the palace staff prepare for the funeral. They established three temporary offices in charge of getting the king’s body ready for the funeral, the funeral ceremony and the construction of a royal tomb. 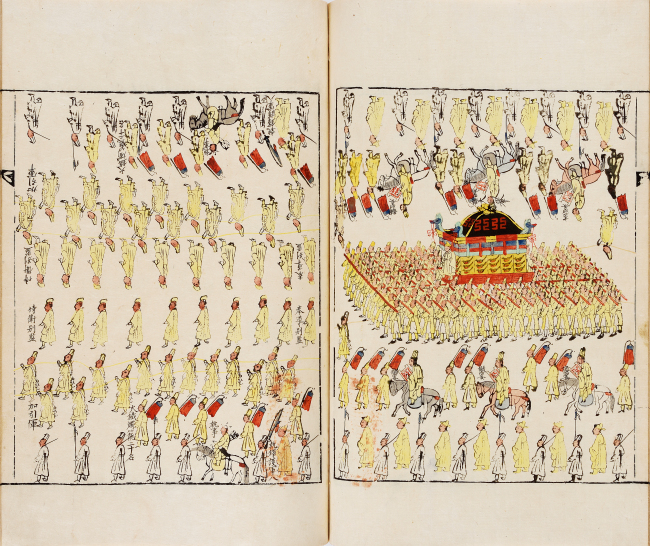 A drawing portrays the funeral procession of 25th King Cheoljong. (The National Palace Museum of Korea)
The location of the king’s burial site was either chosen by the king himself while he was alive, or by pungsu experts after his death. The experts chose sites that were protected by a hill in the back and facing south toward water and, ideally, with layers of mountain ridges in the distance. The burial sites had to be within 40 kilometers of Seoul. It required some 5,000 workers to build the tomb and the adjacent houses where civil servants stayed to manage and protect the tombs.

Some of the burial sites have shrunk in size due to many modern development projects that have encroached on the sites.

“If they had been preserved in their original sizes, Seoul may be one of the top tourist sites in the world today,” said Choi Jong-deok, director of the National Palace Museum of Korea. “It would be a rare sight to see such vast green space surrounding so many royal tombs around the capital city.”

“Unfortunately, the Seolleung and Jeongneung sites in Gangnam remain at only 20 percent of their original size. Urban development has taken a large share of the land that belonged to the royal tomb sites,” Choi said.

Panoramic view of Geolleung (The National Palace Museum of Korea)
Surrounded by high-rise buildings such as Coex and other buildings on Tehran Street, two kings and a queen -- ninth King Seong-jong and his wife Queen Jeong-hyeon and 11th King Jung-jong -- have been buried there for centuries. The neighboring Bongeunsa Temple, now well known for its popular temple-stay program, was initially built to be in charge of maintaining the tombs.

Other Joseon royal tombs are now scattered in the cities of Guri, Goyang, Gimpo, Namyangju, Paju, Hwaseong and in northern Seoul.

Visitors to the royal tombs are allowed to view the sites from Tuesday to Sunday. Opening hours vary seasonally. They are open 9 a.m. to 6:30 p.m. from June to August.

For more information on the opening hours and location, visit http://royaltombs.cha.go.kr.