According to the BAI, the state-run bank neglected its duty in monitoring the shipbuilder’s accounts and financial stability.

The KDB holds 49.7 percent of DSME, making it the biggest shareholder as well as the shipbuilder’s main creditor. 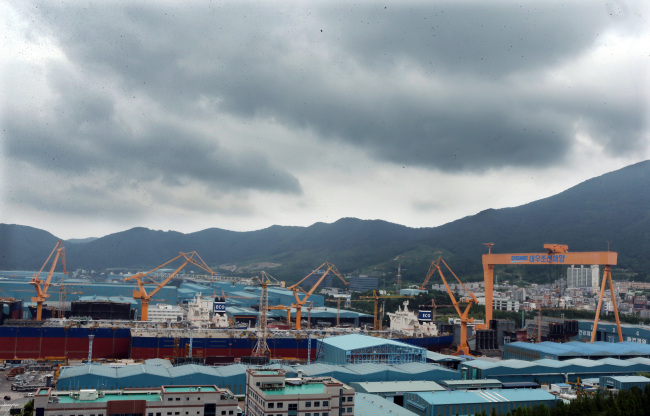 DSME's Okpo Shipyard in Geoje, South Gyeongsang Province (Yonhap)
The BAI said the KDB did not analyze the shipbuilder’s finances after February 2013, despite having set up a system for detecting irregularities in the books.

However, when the BAI used the bank’s system to analyze DSME’s books for 2013 and 2014, the results showed that the data submitted by the shipbuilder received the lowest credibility rating.

The BAI’s analysis also showed that the shipbuilder had deducted more than 2.58 trillion won ($2.2 billion) in expenses arising from marine plant-related projects.

The BAI said that DSME’s accounting manipulation allowed it to post net profits of 323.7 billion won for the 2013-2014 period. In reality, the company had built up a net low of 839.3 billion won in that period.

The BAI said that the bank’s dereliction of duty led to “necessary measures being delayed, and incentives of 6.5 billion won for executives and 198.4 billion won for employees being paid out unfairly.”

The bank was also found to have raised the ceiling on operating funds without properly analyzing the company’s ability to repay loans. DSME posted a net loss of more than 3.5 trillion won for 2015.

With the main creditor blind to its troubles, DSME was allowed to operate unchecked.