[ The Korea Herald – Send E-mail ]
[Herald Review] Jarring mismatch of arthouse and thriller
'The Truth Beneath’ tries too hard to avoid the typical
By Rumy Doo
Published : Jun 15, 2016 - 14:42
Updated : Jun 15, 2016 - 18:20
“The Truth Beneath” tries a little too hard to thwart expectations at every turn. Director Lee Kyoung-mi had previously said she wanted to “avoid the typical” in this film. The result is a plot that lacks logic, characters that are frenzied but hollow, and a jarring mix of genres.

Lee, whose 2008 comedy “Crush and Blush” received favorable reviews, has returned with a thriller starring actress Son Ye-jin as the harangued heroine.

Son, known primarily for detailed romantic portrayals, and Kim Joo-hyuk meet again as wife and husband in a dysfunctional relationship just as they did in the 2008 film “My Wife Got Married,” in which a husband head-over-heels in love with his wife permits her to have other lovers.

This time, Son plays Yeon-hong, the wife of an ambitious politician Jong-chan, played by Kim. Jong-chan is on the cusp of being elected lawmaker in his district and overturning the majority party, while Yeon-hong carries out her duty as a faithful political wife, aiding him in his campaign.

Days before the election, the couple’s daughter Min-jin, played by Shin Ji-hoon, a seemingly good high school student reformed from her rebellious days, goes missing. Yeon-hong is intent on finding her while Jong-chan thinks the once-wayward daughter is probably off partying somewhere with her old trouble-maker friends, and wishes to focus on his campaign. His dispassionate attitude horrifies Yeon-hong, who begins to see her husband in a different light. 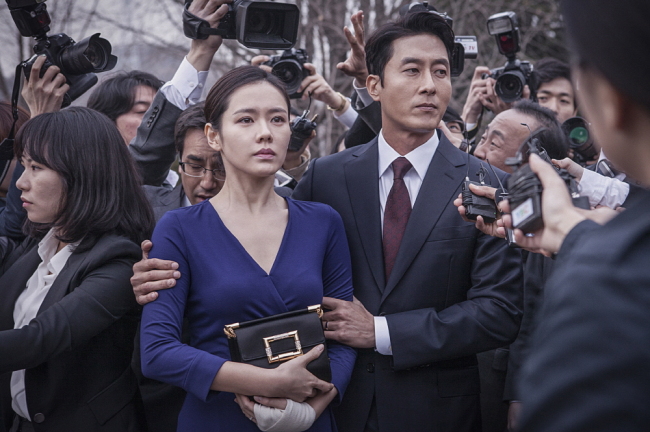 `The Truth Beneath` tries too hard to avoid the typical
When police fail to learn much from a hushed investigation, Yeon-hong takes matters into her own hands. In the course of rummaging through her daughter’s diaries and interrogating her schoolmates, she uncovers layers upon layers of secrets, a series of “truths” beneath the surface of her family.

Lee, who has previously worked closely with the Cannes award-winning director Park Chan-wook (“Oldboy,” “The Handmaiden”), said after a press screening of “The Truth Beneath” in Seoul on Tuesday, “I’m sure I’ve been influenced by (Park) in some way either consciously or unconsciously.”

The Park Chan-wook influences are indeed marked in this ambitious but ultimately flailing film, which attempts to mix thriller, arthouse and indie and deal with motherhood, teenage dejection, political ambition and even lesbianism.

“I wanted to show an incomplete and abnormal mother figure in this film,” she said. “I looked at Korean mothers and thought about different types of motherhood. ... I wanted to show how this mother fulfills her maternal affection ... and the journey undertaken to reach the truth behind a person. (The film) is a thriller on the outside but a melodrama underneath.”

The cinematography recalls Park’s 2005 film “Lady Vengeance,” in which Lee participated as a scripter. Each scene is so forcedly set up it is distracting, with an excessive amount of symmetrical frames and front shots featuring characters’ faces in the center.

As with recently released hits like Na Hong-jin’s “The Strangers” (Goksung) and Park’s “The Handmaiden,” this film pushes situations and characters to extremes -- a characteristic which has come to be emblematic of Korean art cinema.

But “The Truth” remains much too self-conscious in its artsy-ness, appearing to explore extremes more for the sake of indulgence and less as a study of the human condition. The two skilled leading actors deliver laborious performances, but their characters are ultimately void of real emotional resonance, as is the film.

“The Truth Beneath” opens in local theaters on June 23.