The SMG said Sunday that it would cut 30 taxi stands each year over the next five years -- downsizing about one-third of the current 419 taxi stands installed throughout Seoul. 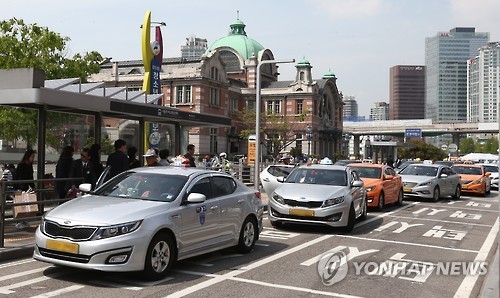 Yonhap
A city official said the plan is intended to save on maintenance costs. The low level of income from advertising at taxi stands is another reason, the official added.

Amid the increasing popularity of mobile apps for chauffeur services such as Kakao Taxi, the numbers of people waiting at taxi stands have been falling. Since the app’s launch last year, at least 8.6 million users had downloaded the app to connect to the taxi-hailing service. More than 210,000 taxi drivers are registered with the app.

Over the last six years, Seoul City has handled over 400 taxi stands in Seoul on a consignment basis. They have mostly been installed near subway station exits for the convenience of commuters.