[ The Korea Herald – Send E-mail ]
Operation begins to lift sunken Sewol ferry
By Kim Da-sol
Published : Jun 13, 2016 - 16:52
Updated : Jun 13, 2016 - 18:55
The Ministry of Oceans and Fisheries said Sunday that it has launched the salvage operation of the sunken Sewol ferry, which has remained underwater off Jindo Island in South Jeolla Province the past two years and three months.

The ministry said it aims to complete the operation of lifting the bow of the ferry by Wednesday. The operation was previously postponed in May due to technical problems.

The lifting of the bow section is considered the most challenging part of the operation. If the lifting proceeds smoothly, the ferry may be brought to the surface by late July, experts anticipate. It will then be transported to a port in Mokpo for inspection. 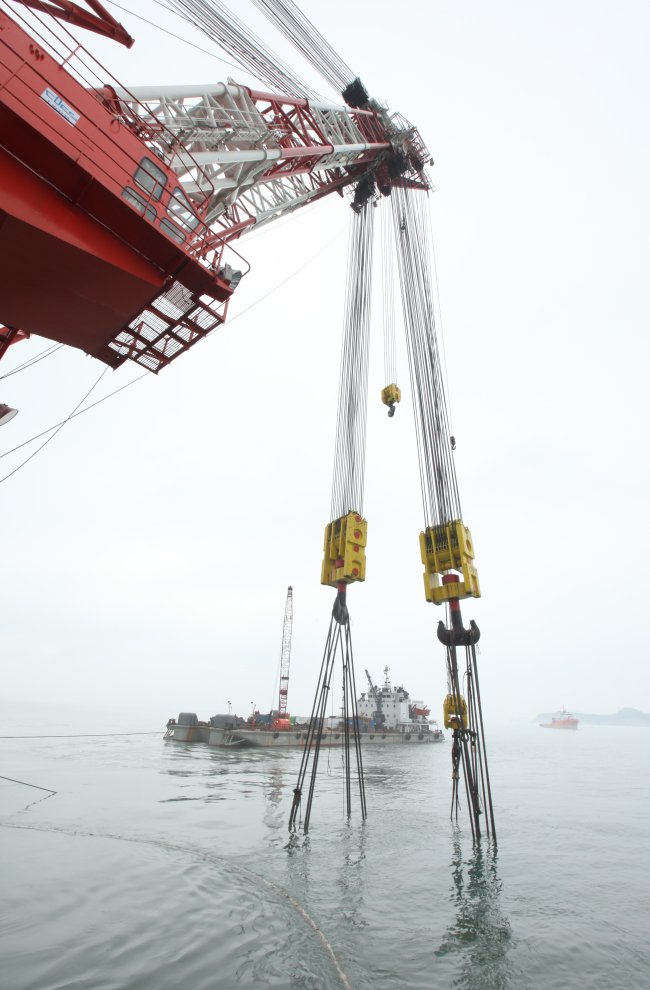 Salvage operations by Shanghai Salvage Co. involving wire construction are underway near waters off Jindo Island in South Jeolla Province on Sunday. /Ministry of Oceans and Fisheries
Once the bow is lifted, work to place 18 lifting beams beneath the ferry will begin to lift the body of the ferry and pull it out from the water. Lifting a 6,825-ton wreck in such a method has never before been tried, authorities added.

A naval architect involved in the operation had projected the success rate of the operation at 80 percent during a briefing in April.

The Sewol ferry was carrying 476 people -- mostly students on a school trip -- when it sank off the southwestern island of Jindo in April 2014. Just 172 passengers were rescued. Nine remain missing.

Bringing the ferry to land has been a key demand of the victims’ families.
Last year, the government announced the salvage operation plan and selected Chinese consortium Shanghai Salvage Co. to spearhead the 85 million won ($72.5 million) project. Shanghai Salvage Co. is a state-led company with over 1,400 naval professionals.