Park is the three-time defending champion of the KPMG Women's PGA Championship, and she's aiming to become the first woman to win a major in four straight years at Sahalee Country Club in Sammamish, Washington, starting Thursday (local time). 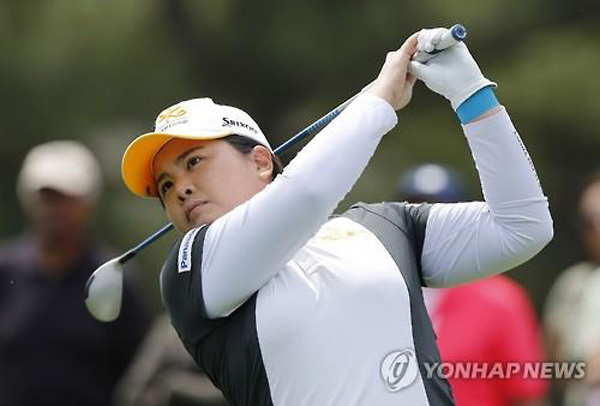 (Yonhap)
Only two other players before her have won a major for three straight years: Patty Berg (Titleholders Championship from 1937 to 1939) and Annika Sorenstam (KPMG Women's PGA Championship from 2003 to 2005).

And by completing one round this week, Park will also become eligible to enter the LPGA Hall of Fame. She met other qualification criteria last year and needed to complete the equivalent of 10 seasons. Park is only the second South Korean to be inducted, after Pak Se-ri.

It has been a frustrating, injury-plagued season for Park. The world No. 2 has withdrawn three times in nine starts in 2016, with no win and a pair of top-10 finishes.

She missed a month of action at the onset of the season with a back injury. She competed in six tournaments but then came down with a left thumb injury which forced her to pull out from two consecutive tournaments in May.

Park sat out last week's event, the ShopRite LPGA Classic in Galloway, New Jersey, to be ready for the major.

She told LPGA.com that playing through nagging pain has been for the greater good of her season and she remains focused on defending her crown again.

"I really wanted to be prepared for the KPMG and defending my title three times in a row. I wanted to check if I was ready for the tournament," she said. "I just wouldn't be able to tell unless I played other tournaments. I wanted to play and see how I felt, and I wanted to be ready."

Park had better be ready against a talented contingent that includes a few fellow South Koreans and a hot-shot Thai.

Park is one of five South Koreans in the top 10 in the latest women's world rankings. Kim Sei-young, the reigning LPGA Rookie of the Year with a victory in 2016, is the next at No. 5, followed by rookie sensation Chun In-gee (No. 6), Jang Ha-na (No. 8) and Amy Yang (No. 9). Chun won the U.S. Women's Open, one of five LPGA majors, last year as a non-member, while Jang has two victories in 2016.

Elsewhere, world No. 1 Lydia Ko will try to end her recent dry spell. The Korean-born Kiwi won the season's first major, ANA Inspiration, at the end of March, but has posted one top-10 finish over her next four starts.

In the meantime, Ariya Jutanugarn of Thailand reeled off three straight victories last month to emerge as the tour's hottest star.

Park has been paired with her, along with Paula Creamer, in the first round. (Yonhap)