In the first meeting between the finance chiefs of the two countries in Seoul on Friday since the G20 summit in 2010, U.S. Treasury Secretary Jacob Lew said that two sides will continue to collaborate in dealing with and resolving any financial matters concerning the North.

Lew’s visit to Seoul comes after the U.S. Treasury Department labeled North Korea a primary money launderer on June 1, recommending measures to cut off North Korea’s access to the global financial system in a bid to further isolate the country. 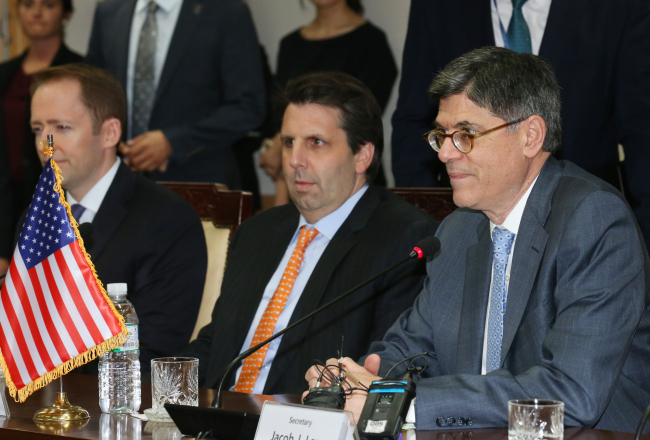 U.S. Treasury Secretary Jacob Lew (right) and U.S. ambassador to South Korea Mark Lippert (center) attend a South Korea - U.S. fiscal policy meeting at the Government Complex-Seoul on Friday. (Yonhap)
Although the secretary said he was here for talks with his counterpart, Finance Minister Yoo Il-ho, on a number of issues concerning fiscal and monetary policies, global growth and exchange rates, North Korea was at the top of the agenda.

With Finance Minister Yoo showing support for the alliance, saying the two countries would continue to work closely together, the U.S. is seemingly drumming up support for its sanctions against the North ahead of the U.S.-China Strategic and Economic Dialogue next week.

As Treasury Secretary Lew will be in Beijing on June 6-7, analysts said that with South Korea’s support, the U.S. is expected to pressure China to take action against North Korea.

Ahead of Lew’s meeting with Yoo, the U.S. secretary met with Bank of Korea Gov. Lee Ju-yeol. The central bank did not disclose information of the meeting, as requested by the Treasury Department.

Observers say the two sides likely discussed foreign exchange rate policies as a follow-up to the latest G7 meeting where Lew urged global economies refrain from devaluing their currencies amid a global slowdown.

Also in April, the Treasury Department added South Korea to its newly created exchange monitoring list, along with China, Japan, Taiwan and Germany.

During the meeting in Seoul, the two policymakers plan to discuss the economic and financial cooperation between South Korea and the U.S. and exchange opinions about how to coordinate policies on multinational platforms, including the G20.

In Seoul from June 2-4, Secretary Lew will also meet with leaders from the business community.

In Beijing from June 5-7, Secretary Lew will participate in the U.S.-China Strategic and Economic Dialogue. Secretary Lew and Secretary of State John Kerry, as President Obama’s special representatives, will be joined for the dialogue by their respective Chinese cochairs, Vice Premier Wang Yang and State Councilor Yang Jiechi, as President Xi’s special representatives, along with a U.S. delegation and their Chinese counterparts.