North Korean leader Kim Jong-un and Chinese President Xi Jinping on Wednesday expressed their willingness to improve strained ties over the North's nuclear weapons program, with both sides saying that they would work together to maintain peace and stability on the Korean Peninsula.

The message was exchanged during a meeting in Beijing between Chinese President Xi Jinping and a visiting high-level North Korean delegation, led by Ri Su-yong, vice chairman of the North Korean ruling party's central committee, according to a report by China's official Xinhua news agency. 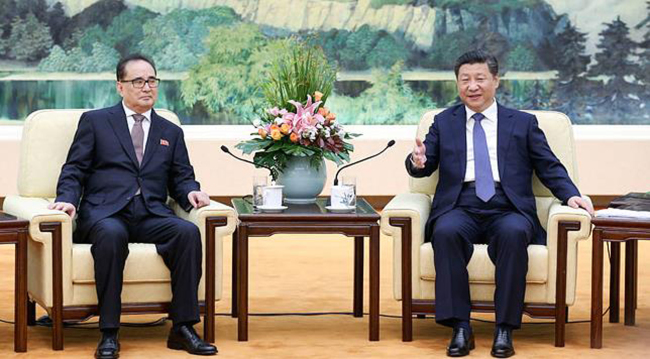 At the meeting, Ri conveyed Kim's message to Xi, the report said. In the message, Kim said North Korea "hopes to work together with the Chinese side, to strengthen and develop the traditionally friendly relations and maintain regional peace and stability in the Korean Peninsula and in Northeast Asia."

Xi said China "attaches great importance" to its bilateral ties with North Korea and Beijing is willing to work with Pyongyang to "reinforce and develop" bilateral relations, according to the report.

Without mentioning North Korea by name, Xi urged "all parties to remain calm and exercise restraint" on the Korean Peninsula.

The Xinhua report, however, made no mention of North Korea's nuclear weapons program.

The meeting in the Chinese capital marks the first time in about three years that Xi has met senior North Korean officials as their political ties remain cool over the North's nuclear ambitions that are seen as hurting Beijing national interests. Ri arrived in Beijing on Tuesday for a three-day visit.

China is North Korea's diplomatic backer and economic lifeline, but it has expressed public displeasure over the North's defiant pursuit of nuclear weapons program.

Still, few analysts believe that China would put enough pressure on the North to abandon its nuclear program out of fear that a collapse of the Pyongyang regime could spark instability in China's northeastern regions.

North Korea was hit by tougher U.N. sanctions in March following its fourth nuclear test in January and launch of a long-range rocket in February.

On Tuesday, Ri held talks with Song Tao, minister of the International Department of the Chinese Communist Party.

In a brief statement on the Tuesday talks, the Chinese Communist Party stopped short of saying that Ri and Song discussed North Korea's nuclear program.

However, North Korea's official media reported on Wednesday that Ri told Song that the North will not give up its policy of simultaneously pursuing both economic development and nuclear development.

"We stay committed to promoting the denuclearization of the Korean Peninsula, peace and stability of the peninsula as well as a proper settlement of relevant issues through dialogue and consultation," Hua said.

"We believe that sound relationship between the two countries is conducive to peace and stability on the Korean Peninsula," Hua said. (Yonhap)