The shrine, close in style to the traditional Korean house, or hanok, was founded to appease the spirit of Prince Geumseong (1426-1457), who was ordered a lethal dose of poison upon charges of trying to reinstate the deposed King Danjong. 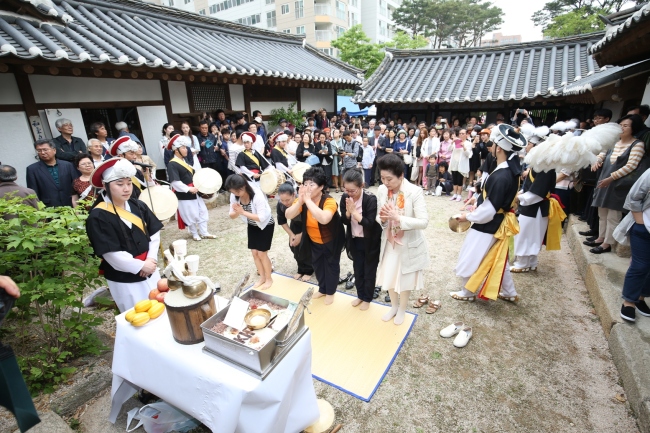 Shamans and a Korean traditional percussion band celebrate the opening of the Shamanism Museum in Eunpyeong-gu in northwestern Seoul on May 25. Eunpyeong-gu Office
As the one and only shamanic shrine in the country, it was designated an Important Folklore Cultural Heritage by the Cultural Heritage Administration in 2008. The shrine is estimated to have been built in the early 1880s. It exhibits well-preserved ritual goods and pictures of shaman gods typical of the Joseon era.

Geumseongdang Shrine was to be demolished when the neighborhood was designated as “Eunpyeong New Town,” a residential area, in 2008. But after discussions between Seoul City and CHA, it was decided that the shrine would be repaired and preserved to pass on the history of folk religion to future generations.

The unique relic from the past became the Shamanism Museum with the help of folklorist Yang Jong-seung.

Yang has displayed more than 20,000 shamanic artifacts, paintings, documents and items of clothing that he collected from both inside and outside the country, including from the Himalayan region, Mongolia, China and other countries.

“We hope this museum can work as a platform for folk religion as well as an experience zone for Korea’s traditional culture,” the Eunpyeong-gu Office said in a statement.

Since last year, Eunpyeong-gu has been putting effort into developing the area into a national tourism asset.

After it was designated by the government last April as the “Korean Culture Experience Specialized District,” Eunpyeong-gu launched six city development projects to revive the area’s local economy. The district recently began in earnest two of the proposals -- the Mount Bukhansan Development Project and the Traditional Culture Development Project, which both involve hanok neighborhoods.