[ The Korea Herald – Send E-mail ]
Public anxiety grows over use of biocide products
By Kim Da-sol
Published : May 20, 2016 - 16:21
Updated : May 20, 2016 - 16:21
Shin Hyang-gi, a 51-year-old housewife, begins her day by washing piles of dishes and utensils used for breakfast. The routine is followed by laundry, toilet cleaning, changing moisture absorbers inside closets and a shower.
Before stepping outside, she wears sunscreen on her face and neck and sprays deodorant on her jacket.

A biocide is a substance formulated to destroy organisms harmful for humans and is often included in household products for antibiotic or sterilizing purposes.

These products, however, can exert negative influence on people if used in excessive doses, experts point out. 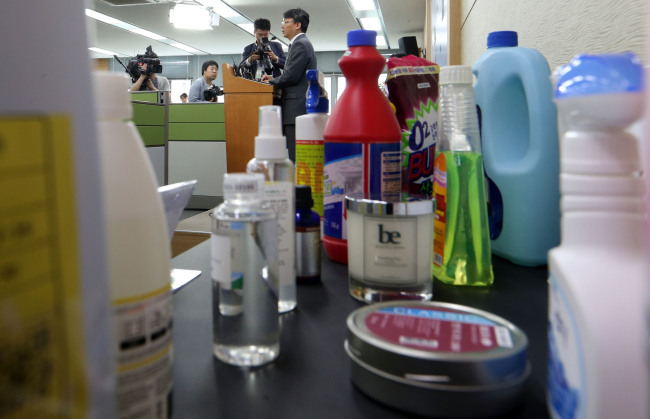 (Yonhap)
Under the current law, it is the Environment Ministry that assumes general responsibility over substance toxicity, but only 15 types of household products come under the supervision of the ministry as according to the to the Chemicals Registration and Assessment Act. Of them, just three are classified as biocide product to be directly handled by the ministry -- antiseptic, repellent and preservative.

The management of other biocide-containing products is broken down to four different departments. Sterilizers are managed by the Health Ministry, pesticides by the Agriculture Ministry, antifoulants by the Maritime Ministry and dehumidifiers by the Industry Ministry.

Such dispersive system comes in contrast to that of the European Union which since 1998 has adopted an integrated management system over all biocide products.

Experts argue that the overlapping roles of ministries and the consequently loose control system may lead to another humidifier sterilizer tragedy.

“With several supervising ministries involved, the responsibility issue is likely to occur in case of accidents,” said an official from the Korea Environment Institute.

Amid outbreak of toxic humidifier sterilizer tragedy which reportedly led to at least 260 deaths as of April, environmental organizations and researchers argue that current chemicals law should be revised so that more biocide products come under regulation.

“You can basically view all chemicals -- including biocides -- as potentially harmful,” a researcher from the National Forensics Service told The Korea Herald.

“The current law only defines the management manual of chemical products based on their toxicity, excluding the detailed use and exposure.”