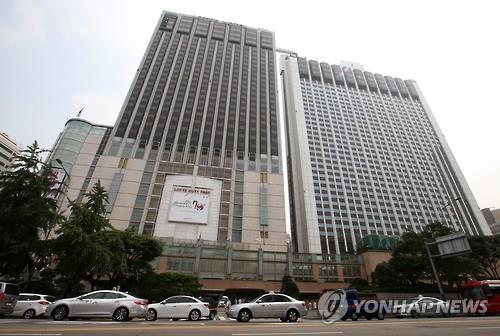 Hotel Lotte (Yonhap)
The offering is estimated to be around 4.6 trillion to 5.7 trillion won, and its medium range of price would surpass the record amount of 4.9 trillion sale by Samsung Life Insurance Co. in 2010.

Hotel Lotte, the world's No. 3 duty-free operator, said it will use the fund to step up its duty-free business, hotel chain and theme park to offer comprehensive options to travelers.

"Hotel Lotte will use the IPO fund to invest in expansion of duty-free stores at home and abroad to become the world's largest duty-free operator," the company said in a statement.

The duty-free business is the company's key source of income, accounting for 86 percent of its total sales.

Starting from next month, Hotel Lotte plans to hold a series of deal roadshows in major cities, including New York, London, Singapore and Hong Kong, according to company officials.

The listing of Hotel Lotte is one of the reform pledges that Lotte Group Chairman Shin Dong-bin has made as part of efforts to improve corporate image after a bitter family feud for control of the retail-focused conglomerate, which has sprawling businesses both in South Korea and Japan.

The prolonged family feud has virtually come to an end as the founder's second son and incumbent chief won shareholder support in March to tighten his grip on the nation's fifth-largest conglomerate.

In December, the 94-year-old founder's younger sister requested a Seoul court to name her as his legal guardian, claiming her aging brother was no longer capable of making consistent decisions.

As a result, the aged tycoon was unseated from board seats at major affiliates during a shareholders' meeting in March.

Experts say Shin's early discharge from the hospital has raised the likelihood of his sister becoming his legal guardian.

"The case of dementia requires at least two weeks of hospitalization for examination. His discharge from hospital in just three days means that officials could not proceed with normal procedure," Lee Hyun-kon, the lawyer for Shin's younger sister, said. "The possibility of (the court's) appointment of a legal guardian for Shin has risen as he could not prove that there's no problem with his mental health."

Dong-joo has claimed he is his father's hand-picked successor, but Dong-bin argued that his father is unable to make reasonable judgments due to mental health problems. (Yonhap)