[ The Korea Herald – Send E-mail ]
Seoul ups defense after N.K. reaffirms nuclear ambitions
By 옥현주
Published : May 9, 2016 - 17:38
Updated : May 9, 2016 - 17:38
With North Korea moving to adopt new ruling party rules to declare itself a “nuclear-armed state,” the South Korean government has stepped up defense against the North, saying that it will “never be recognized as one.”

According to observers, the North is expected to conclude its four-day Working Party Congress that began on Saturday with a declaration of being a nuclear-armed state and formally bestowing the highest honors upon Kim. 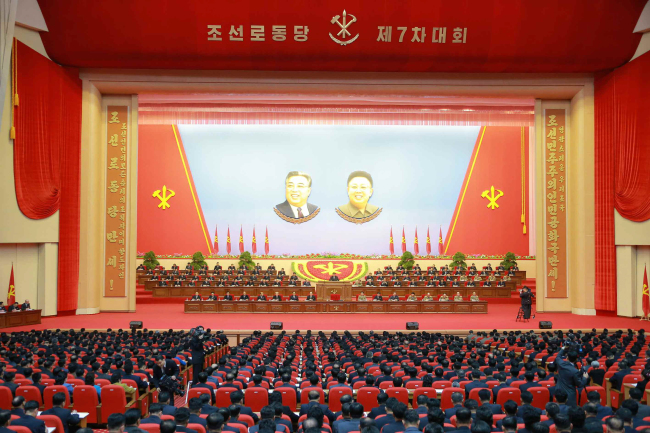 The congress of North Korea's ruling Workers' Party of Korea (Yonhap)
North Korea on Sunday said that its goal of developing nuclear weapons in parallel with boosting its economy -- the so-called “byeongjin” policy introduced in 2013 -- is now its permanent objective. The North declared itself a nuclear state in its constitution in 2012.

It also reasserted a federacy-based unification of the Koreas, which was first suggested by the North’s founding leader Kim Il-sung -- the incumbent leader’s grandfather -- that encompasses retaining the autonomy and ideology of both Koreas while establishing a federal government in which Seoul and Pyongyang would have equal rights and obligations to.

The South Korean government once again snubbed Pyongyang’s claims, and dismissed its pledge to “work toward the world’s denuclearization” as lacking authenticity.

“It is our (Seoul) and the international community’s consistent stance never to acknowledge the North as a nuclear state. ... The government is keeping the door to dialogue open. But in order for there to be talks, the North must cease provocations and demonstrate its genuine will to denuclearize,” said Defense Ministry spokesman Moon Sang-kyun.

The ministry also downplayed Kim’s calls for military talks between the Koreas, raising questions about the legitimacy of the suggestion as Pyongyang has showed no willingness to scrap its nuclear programs.

Seoul’s Foreign Ministry also dismissed recent reports that China has been seeking cooperation with the U.S. to kick off peace talks between Washington and Pyongyang.

“Seoul and Washington is firm on their stance that denuclearization should precede any talks with North Korea,” a ministry official said.

South Korea’s military officials said Monday that it is kicking its so-called 4D Operational Concept -- detect, disrupt, destroy, defense against the North’s nuclear and missile attacks -- into overdrive in light of Pyongyang reasserting its nuclear ambitions.

At the center of the plan is the Korean Air and Missile Defense system, which is designed to eliminate missile threats preemptively after detecting signs of an imminent launch, and the Kill Chain missile defense system that takes out missiles in mid-air. Both systems are expected to be deployed by around the early to mid-2020s.

According to officials, Seoul and Washington are slated to discuss the 4D plan during the two-day Korea-U.S. Integrated Defense Dialogue that will commence later Monday in Washington D.C.

The military plan includes boosting the detection capacity of the systems by upgrading the currently used multi-purpose satellites and purchasing an upgraded version of the current Green Pine ground-based missile-defense radar. It also plans to deploy Global Hawk unmanned aerial vehicles, which officials say will extend the military’s eyes across the entire North Korean territory, and F-35A fighter jets starting from 2018, along with German 500-kilometer-ranged Taurus air-to-surface missiles by the second half of the year.

Since the start of 2016, North Korea has conducted a nuclear test, a long-range rocket launch, and fired a submarine launched ballistic missile, along with multiple short-range and medium-range ballistic missiles. This led the U.N. Security Council to adopt a resolution including powerful economic sanctions against the North.

The North’s official mouthpieces have also carried Kim’s messages on Sunday that Pyongyang will “not use nuclear weapons unless its autonomy is infringed upon,” and that it will work toward “denuclearization of the world.”

They stated that advances in the defense category -- particularly related to nuclear weapons -- are directly related to the “fate of the people, and security of the state,” vowing to realize miniaturization and diversification of its nuclear arsenal “to become the nuclear power of the East.”