Kim Deok-jong, whose 5-year-old son died in 2009 after battling a respiratory disease, and Choi Ye-yong, head of the Asian Citizen’s Center for Environment and Health, arrived in England on Thursday for a week-long protest at the company headquarters and other relevant organizations in Europe. 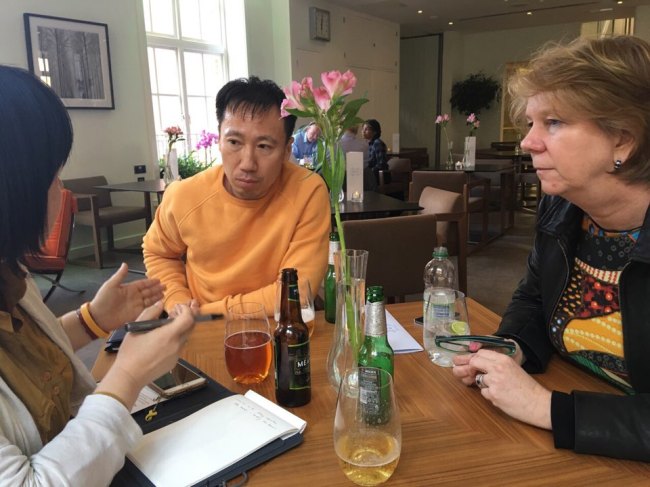 Kim Deok-jong (center), whose 5-year-old son died in 2009 after battling a respiratory disease by using Oxy’s humidifier sterilizer, talks with an official from Reckitt Benckiser headquarters (right) in London on Wednesday local time. (Asian Citizen’s Center for Environment and Health)
“Friday’s meeting with the chief executive at Reckitt Benckiser Group headquarters in Slough was arranged by the firm’s public relations official, whom we met Wednesday,” Choi told The Korea Herald.

Choi said that RB officials were waiting for them at No. 11 Cavendish Square -- where RB was scheduled to hold its annual general meeting Thursday -- when they visited the place a day before the official protest.

“But the firm wanted to have a closed door meeting to avoid publicity in the local media,” he added.

According to organizers, the main agenda of Friday’s meeting will be to demand that the RB CEO makes an official apology in front of victims in Korea and provides them with concrete compensation measures in documented form.

CEO Kapoor is one of the eight executive board members against whom humidifier sterilizer victims, joined by ACCH and liberal lawyers group Minbyun, filed a suit on Monday. They demanded that the prosecution summon all eight members to Korea for investigation.

Meanwhile, the prosecution has stepped up its investigation into the sterilizer case by the raiding offices of professors at Seoul National University and Hoseo University who had led the product toxicity test requested by Oxy Reckitt Benckiser -- officially renamed Reckitt Benckiser Korea since 2014. An SNU professor surnamed Cho was detained without warrant Wednesday in connection to the case.

The prosecution suspects that the professors allegedly received money from RB Korea in exchange for omitting some of the product’s toxicity test results. In April, the prosecutors traced 250 million won ($214,600) that was allegedly wired from RB Korea in 2011 to a personal bank account of the SNU professor in charge.

“We will henceforth break down the probe into two tracks, inquiring into RB’s responsibility on one hand and the toxicity test manipulation on the other,” a prosecutor from the special probe team was quoted as saying.