The prosecution suspects that the professors allegedly received money from Oxy Reckitt Benckiser -- formally renamed Reckitt Benckiser Korea since 2014 -- in exchange for omitting some of the product’s toxicity test results. In April, the prosecutors traced 250 million won that was allegedly wired from RB Korea in 2011 to a personal bank account of the SNU professor surnamed Cho.

A professor surnamed Yoon from Hoseo University also allegedly received 100 million won from RB Korea at a similar time, according to the prosecution.

The Seoul Central District Prosecutor’s Office’s special probe team is widening the probe by adding five more prosecutors to cover the case from the original six.

The prosecution has accelerated its investigation into the sterilizer case that was first revealed in 2011 from the end of last year. The products are blamed for at least 143 deaths.

Meanwhile, the father of a deceased victim of Oxy humidifier disinfectant headed for the U.K. on Wednesday to launch a weeklong protest at the company headquarters and other relevant organizations in Europe.

Kim Deok-jong, whose 5-year-old son died in 2009 after battling a respiratory disease, will stage a protest at Cavendish Square in London on Thursday, organizers said. 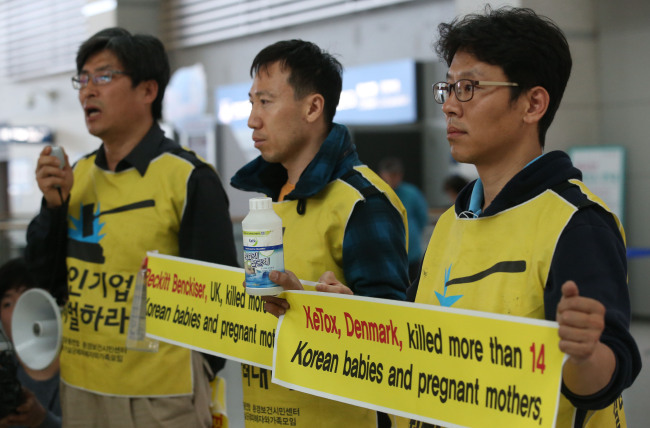 Kim Deok-jong (right) holds a press conference at Incheon International Airport on Wednesday before leaving for the U.K. to stage a protest at Reckitt Benckiser’s headquarters. (Yonhap)
The parent company Reckitt Benckiser Group is scheduled to hold its annual general meeting at No. 11 Cavendish Square on the day. He will be joined by Choi Ye-yong, head of the Asian Citizen’s Center for Environment and Health.

On Friday, they will move to the RB headquarters in Slough, Berkshire, to deliver their protest letter.

“When we visited the RB headquarters last year, we were outraged at how they declined to take responsibility, by separating the Seoul office and the group,” said Kim at a press conference before boarding his flight at Incheon International Airport.

“The prosecution said RB headquarters supervises the Korean affiliate, so we are going to demand their responsibility once again,” Kim added.

The two protesters will also visit British retail giant Tesco, headquartered in Hertfordshire, to demand it takes responsibility for the toxic humidifier disinfectant sold at its Korean affiliate Homeplus which led to the loss of 13 lives.

Their protest will continue in Denmark with visits to chemical manufacturer Ketox, Denmark’s Environment Ministry, Foreign Ministry and the prosecutor’s office.

In 2001, a local household firm Oxy merged with RB and was renamed Reckitt Benckiser Korea in 2014. The firm was criticized for changing its name on suspicion that it tried to escape due responsibility on the disputed humidifier disinfectants.

But RB Korea’s representative director Ataur Rashid Safdar refuted the criticism during a press conference on Monday by saying that despite the name change, “RB Korea will not abandon legal liability of the company over any damage from its products.”

The National Assembly’s Environment and Labor Committee said it will hold a meeting with Minister of Environment Yoon Seong-kyu next week to be briefed on the estimated damages from toxic humidifier disinfectants and the status of compensation and medical treatment for victims.