[ The Korea Herald – Send E-mail ]
Samsung reaffirms no plan for OLED TV
TV chief says LCD-based quantum dot could progress faster than OLED
By Korea Herald
Published : May 4, 2016 - 14:22
Updated : May 4, 2016 - 14:22
Samsung Electronics president and TV chief Kim Hyun-seok on Tuesday reaffirmed that the company has no immediate plan to produce organic light-emitting diode TVs. But the tone and manner was stronger than ever.

“I have always said it would take two to three years to consider OLED TV. But now when little progress has been made on its tricky production and high costs since our suspension back in 2013, I wouldn’t say OLED is our future direction,” he told reporters at the company’s headquarters in Suwon, Gyeonggi Province. 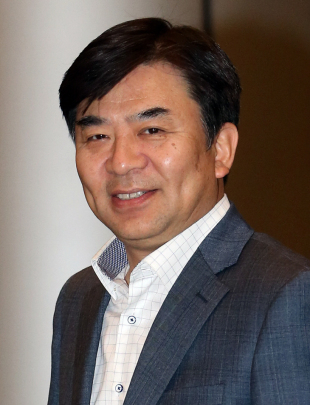 Samsung Electronics president Kim Hyun-seok
OLED boasts more accurate and vibrant picture quality compared to conventional liquid-crystal displays. Despite its increasing usage in smartphones and other smaller devices, its TV adoption has been delayed due to the higher costs of production and lower manufacturing yields of the larger panels.

Samsung is a market leader in smaller OLED. It has recently inked a deal with Appel to supply OLED screens for next-generation iPhones.

But when it comes to TVs, Samsung has poured more resources into improving the quality of LCD TVs. Especially its latest SUHD TVs feature the quantum dot technology that uses tiny particles that emit a different color of light depending on size.

“It is also likely that new technology like quantum dot could progress faster than OLED,” he said.

Samsung claims that its quantum dot TV already outpaces current OLED TVs in terms of picture quality and brightness, even though it is still disputable which display is the better display technology.

Currently, its archrival LG Electronics is a market leader in OLED TVs.

Last year, Samsung was the biggest TV maker with a market share of 27.5 percent in terms of revenue. But the company now sees less profits as prices continue to fall due to cheaper products from Chinese rivals.

The company said it would beef up premium products to restore profits. On its home turf, sales of the latest quantum dot TVs have increased more than 40 percent compared to last year’s models.

The company plans to launch the TV models in Europe and Brazil in the coming months in line with the regions’ big sports events such as the Euro 2016 and the Rio Summer Olympics in August.

“Starting this year, the quantum dot TVs are being launched globally. We will become the No. 1 TV maker for the 11th consecutive year,” Kim said.