Civic groups in support of sexual minorities are set to file a petition against a Protestant-affiliated party in late May amid growing controversy over the party’s campaign pledges.

The groups advocating the lesbian, gay, bisexual and transgender community in South Korea began to collect signatures online on Tuesday, hoping to lodge the petition with the National Human Rights Commission of Korea on May 24. 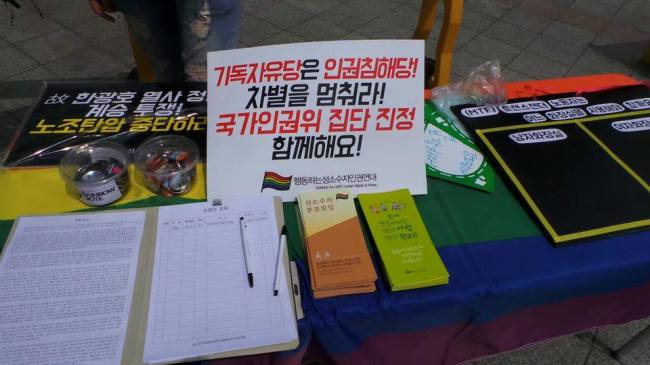 There are a flyer reading “Christian Libertarian Party is Human Rights Violation Party! Stop discrimination! Please join us for filing a petition with the National Human Rights Commission of Korea!” and a piece of paper to collect signatures on a makeshift table during a May Day rally held in central Seoul, Sunday. (Solidarity for LGBT Human Rights of Korea)
“We aim to pressure the party and raise awareness on illegality of its discriminatory election pledges,” Osori, an activist working for Solidarity for LGBT Human Rights of Korea, told The Korea Herald. “We want the human rights watchdog to confirm that the Christian Party’s inflammatory acts are illegal and in violation of equal rights.”

The petition came amid growing debate over the anti-gay and discriminatory pledges by the new Christian Libertarian Party that fielded their candidates in the April 13 parliamentary election.

“The Christian Libertarian Party officially and publicly incite homophobia and xenophobia through their election pledges on flyers, banners and in media,” said a human rights lawyer Han Ga-ram, who is preparing to lodge the petition along with other pro-LGBT activists. 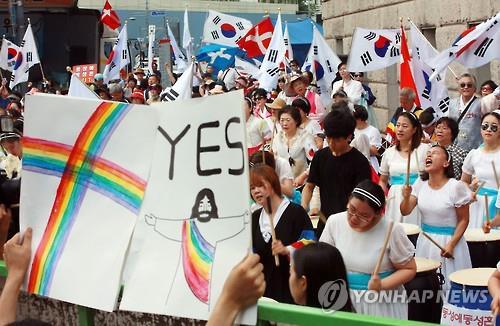 The Christian Libertarian Party has largely opposed three things: creation of a Halal town, passage of an antidiscrimination law and homosexuality.

The party said in its election flyers and posters that the plan to build Halal factories would invite at least 300,000 Muslims, which they said would put the country at higher risk of terrorism and sexual crimes against Korean women. The move drew ire from the Korea Muslim Foundation which called it “vicious defamation against a specific region” and demanded the nation’s election committee withdraw the anti-Muslim campaign flyers. 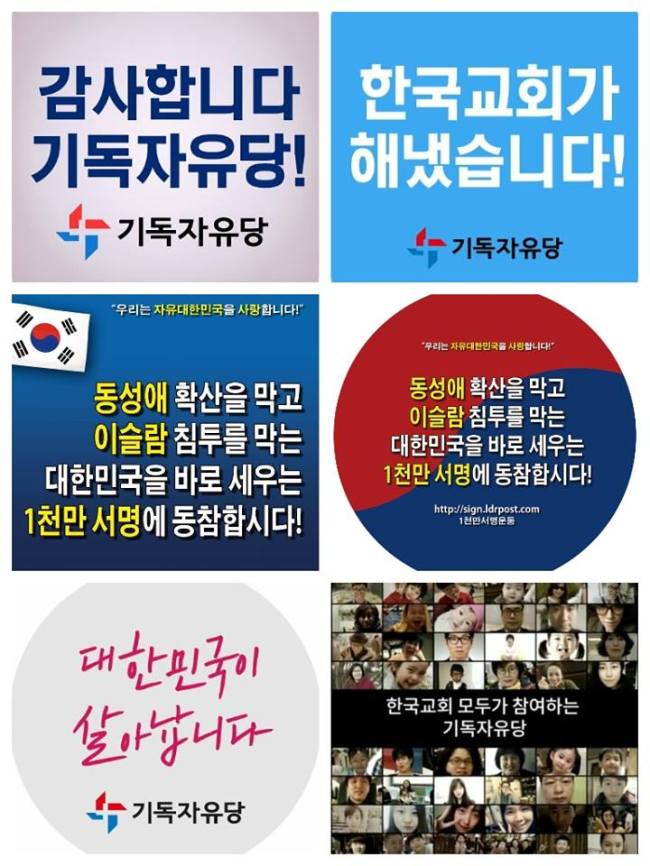 Posters and flyers distributed across the nation during the April 13 election campaign read “Korean churches made it!” and “Let’s join the petition to establish Republic of Korea which can stop spread of homosexuality and invasion of Islam.” (Christian Libertarian Party)

The Protestant-backed party also vowed to stop the National Assembly from passing the pending antidiscrimination law which it sees as expanding homosexuality and undermining the Bible’s teachings. It also said that homosexuality is against humanity and causes sexual diseases such HIV-AIDS on its campaign trail.

“The party’s presence poses a fundamental threat to human rights and democracy. We could not sit back and stay silent when the party is now entitled to government subsidies,” the lawyer Han said.

In South Korea, any political party with a seat in the parliament or with more than 2 percent of votes in the election can receive political funds from the government.

The Christian Libertarian Party earned 2.63 percent of total votes. Another religion-backed Christian Democratic Party took 0.54 percent of the votes, putting the combined votes for the Christian bloc at over 3 percent.

The Christian Libertarian Party failed to secure any seats in the 300-seat National Assembly, but it is expected to receive about 400 million won in the second half of the year and 1.9 billion won in 2017. 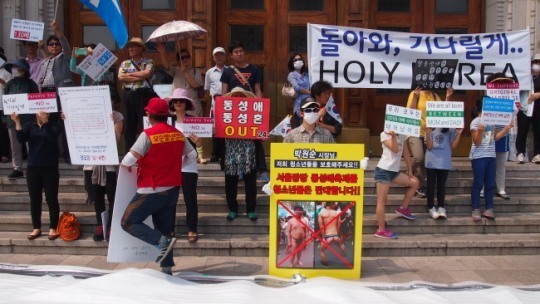 The International Covenant on Civil and Political Rights by the United Nations General Assembly, which took effect in Korea in 1990, prohibits any advocacy of national, racial or religious hatred that incites discrimination, hostility or violence. It also stipulates that all persons are entitled to protection against discrimination on grounds such as race, sex and religion.

“On one hand, freedom of speech in the political arena should be allowed to the fullest,” said law professor Hong Seong-soo from Sookmyung Women’s University. ”On the other hand, politicians’ opinions inciting discrimination against minorities and different religions in public should be regulated because such actions make those on the edge of society impossible to lead their lives.”

“Currently, South Korea has no law that can ban discrimination and inflammatory remarks in public,” Hong said, adding that the Constitution stipulating antidiscrimination values cannot serve as legal deterrence. 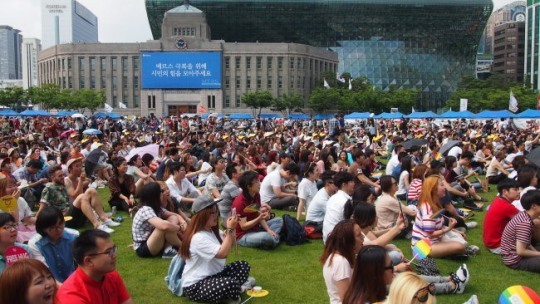 Antidiscrimination laws aimed at rooting out bigotry on such grounds as gender, disability, age, race, marital status and religion have been submitted to the National Assembly since 2007. But they remain deadlocked in the face of Protestant groups’ fierce resistance to equal rights for sexual minorities.

For now, the NHRCK receives complaints and opens an investigation when discrimination based on sexual, religious and racial grounds takes place. If needed, it imposes recommendations, but they have no legally binding force.

But the prospects for the upcoming petition against the Christian party do not seem rosy, with the NHRCK official mulling over whether it is within its authority to investigate a political party’s election pledges.

“When we receive a petition on discrimination, we decide whether the discrimination occurred in such sectors as employment, education. If not, we are likely to dismiss the case.”

The lawyer Han said that he hopes to receive a “proper answer.”

“What is more serious than discriminatory action itself is the fundamental structure that continues to allow discrimination to spread across the country,” he said. “It is the human rights watchdog’s responsibility to fix the structure.

The link to the petition: bit.ly/countering_hate