Science Minister Choi Yang-hee and Mohammad Farhadi, the Iranian minister of Science Research and Technology met in Tehran on the day to sign a partnership deal to run joint research and development projects in science and technology. 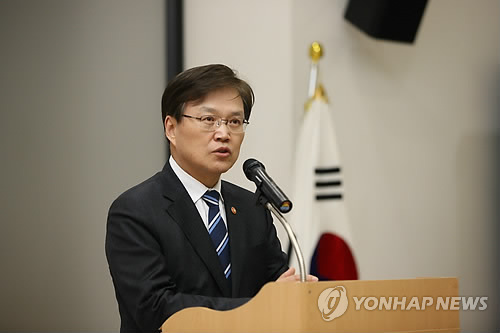 Choi Yang-hee, minister of Science, ICT and Future Planning. (Yonhap)
The latest partnership is in line with the efforts of the Korean and Iranian governments to restore bilateral relations severed due to the U.S.-led international sanctions against Iran, which were lifted earlier this year.

“Iran used to be a core partner in the ICT sector in the Middle East before the sanctions were implemented. The ministry will spare no effort to support Korean companies in the science and ICT sectors to enter the region,” said Minister Choi, who accompanied President Park Geun-hye on a three-day state visit to Tehran.

The two ministries will launch a committee in charge of operating joint projects for science and technology next year and fine-tune details of the partnership.

To normalize the two governments’ relationships in the information and communications sector, the Korean ministry has also reached an agreement with the Iranian Ministry of Information and Communications to work together in the ICT sectors of the two nations.

The Korean and Iranian governments used to maintain a partnership in ICT from 1991 and 2004, until the nuclear sanctions.

Research institutes under the Korean ministry will team up with Iranian universities and research organizations to operate joint ICT projects.

The Electronics and Telecommunications Research Institute, a state-run research agency, has signed a memorandum of understating with Iranian investment institute TEMInvest to develop and commercialize ICT technology. ETRI will try to support Korean ICT firms to tap into the Iranian market though the latest partnership. TEMInvest has a 50 percent stake in Telecommunication Company of Iran, the nation’s largest telecom firm.

Korea Research Institute of Bioscience and Biotechnology, a government research institute for biotechnology, will work with University of Tehran to develop biofuels derived from micro algae.

Private companies are also gearing up to make inroads into Tehran. Korean network carriers KT and SK Telecom will try to partner up with local telecom services providers to operate new businesses there, including those for telecom infrastructure and the Internet of Things.