[ The Korea Herald – Send E-mail ]
Korea to discuss ways to finance restructuring
By 박형기
Published : May 1, 2016 - 14:29
Updated : May 1, 2016 - 15:16
Korea is expected to launch a task force team consisting of officials from finance and regulatory agencies to exchange opinions and discuss ways to increase the capital base of state-run policy banks for massive restructuring of cash-strapped shipping and shipbuilding companies.

This comes as the Financial Services Commission, the financial regulatory policymaking body, unveiled its initial plan to launch creditor-led debt restructuring last week, citing the need to increase capital buffers of the state-owned Korea Development Bank and the Export-Import Bank of Korea. 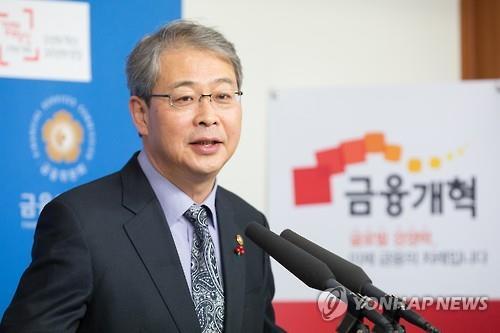 Financial Services Commission Yim Jong-yong (Yonhap)
With about 20 trillion won ($17 billion) exposed to bad loans, the FSC called on the Finance Ministry and the Bank of Korea for support in injecting capital into KDB and Eximbank Korea, whose BIS adequacy ratios fell below the standard 15 percent.

It remains to be seen whether the fiscal policy agency and the monetary policymaker can narrow their political differences over ways to financially support the policy banks when the team meets this Wednesday.

While the Finance Ministry said this support scheme for restructuring requires a mix of fiscal and monetary policies, the central bank stressed that the bank’s capital increase should be carried out in the hands of fiscal policymakers, rather than monetary policymakers.

Finance Minister Yoo Il-ho said that it should not seek to resolve this issue only through one policy.

“It is not appropriate to approach this in one direction,” said Finance Minister Yoo on a television news program.

“A policy mix should be considered,” he stressed, adding that a Korean version of quantitative easing was also one effective way to finance restructuring costs.

But the Bank of Korea said it will need full consensus from the public before the central bank can provide liquidity support through the program enabling it to print and pump money into the banks for debt-laden companies, but not for households.

“In order for the central bank to perform fiscal duties, we think this will require a social consensus.”

The central bank added that after the consensus, its monetary policy committee will need to decide on whether it should pursue a fiscal role of injecting capital into the banks.

Observers say that should the BOK provide liquidity to the banks through acquisitions of their bonds and companies fail to complete restructuring, the central bank will also be asked to take responsibility.

A Korean version of quantitative easing that enables the central bank to invest in bonds issued by KDB will need a legal revision. The government believes this approach will be faster than that of Korea issuing treasury bonds and allocating extra spending to finance corporate restructuring, according to the Finance Ministry.