“As Korea avoided the manipulator designation, there won’t be any significant changes in the foreign exchange polices,” Finance Minister Yoo Il-ho was quoted as saying. 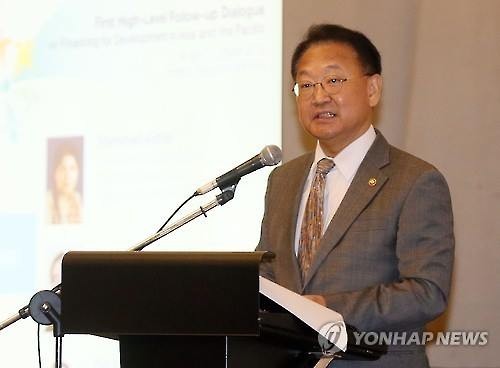 Finance Minister Yoo Il-ho (Yonhap)
“Although Korea is included on the monitoring list, this always happens with the U.S. department. There will be no changes (in the country’s policies),” Yoo added.

The Bank of Korea said that it will continue to abide by its principle to ensure stability when the market faces abrupt volatility.

The U.S. Department of Treasury has issued a report stating that it will continue to monitor Korea on its foreign exchange operations and policies, but did not classify Korea as a currency manipulator.

In the Foreign Exchange Policies of Major Trading Partners of the U.S. report, the Treasury Department put Korea – along with China, Japan, Taiwan and Germany – on its newly created “Monitoring List.”

Asia’s fourth-largest economy met two of the three criteria set by the Treasury, as Korea has gained “significant” trade surpluses with the U.S., with its current account surplus in proportion to its gross domestic product increasing last year. However, the U.S. did not find that Korea had intervened in the foreign exchange market to deliberately manipulate and depreciate the value of the Korean currency.

“China, Japan, Germany and Korea are identified as a result of a material current account surplus combined with a significant bilateral trade surplus with the United States,” it added.

With Korea recording a bilateral trade surplus with the U.S. at $28.3 billion, accounting for 7.7 percent of its GDP in 2015, well above the Treasury monitoring threshold of $20 billion and 3 percent of GDP, Korea was included on the foreign exchange watch list.

The Treasury added that Korea did not conduct a “one-sided intervention” to weaken its currency, but sold an estimated $26 billion in foreign exchange to “resist” the rapid depreciation of the won from the second half of 2015 until the first quarter of this year.

This was a shift away from Korea’s allegedly conventional practice of making its currency weaker to spur exports.

Nevertheless, the Treasury Department again urged Korea to “limit” its involvement in the exchange market, unless for market stability, and to boost transparency of its exchange operations.

“We encourage the Korean authorities to increase the transparency of their foreign exchange operations and take further steps to support domestic demand,” it said.