[ The Korea Herald – Send E-mail ]
Korea to pursue rapid restructuring, safeguard jobs
By 박형기
Published : Apr 28, 2016 - 16:07
Updated : Apr 28, 2016 - 16:27
South Korea’s Finance Minister Yoo Il-ho has called for rapid and aggressive restructuring of companies under heavy debts to ensure that this does not negatively affect the capital market and household consumption.

In an economic-related ministerial meeting on Thursday, the finance minister also urged other officials to draw up countermeasures and support mechanisms against the expected massive layoffs from companies that are about to go through creditor-led debt reduction. He urged agencies to implement measures should companies find it difficult to raise funds in the capital market on worsening sentiment stemming from corporate restructuring. 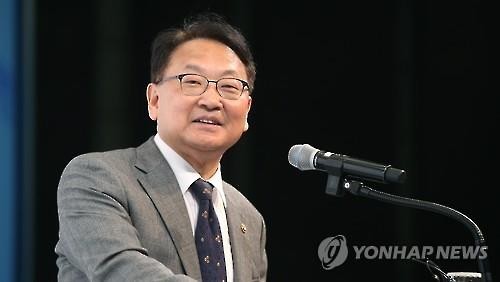 Finance Minister Yoo Il-ho (Yonhap)
“We need to deal with restructuring not by holding it off further but by resolving it right now,” Yoo said in the meeting, adding that this needs to be done quickly with a focus on trying to revive the economy.

“Restructuring should be led by creditors based on market principles, and the government’s role should be preemptively dealing with companies with bad debts through supervision, as well as coming up with measures against unemployment.”

In order to spur job creation, the government will seek to expand tax benefits for companies seeking to create new businesses in the areas of the Internet of Things, smart energy and automobile, and biotechnology.

Benefits include offering tax credits as high as 30 percent on research on the development of new businesses for small and medium-size enterprises, and 20 percent for conglomerates. Producers of media content such as movies and TV programs will be able to get tax credits of up to 10 percent on production development and expenses.

The Finance Ministry plans to revise tax laws enabling companies in the services industry to see further benefits in tax credits of up to 75 percent from the current 50 percent should they create jobs through innovation.

These various measures come as Korea is facing slow growth both at home and abroad, further beset by a series of corporate restructuring expected in the near term.

The government has called on conglomerates to self-evaluate and improve their finances. The country’s regulators also plan to evaluate the books of conglomerates on its debt watch list until July this year, and those of small and medium-size enterprises from July-October. The government will strictly classify and deal with companies found to be financially vulnerable, the Finance Ministry said.

Finance Minister Yoo also called on economic officials to keep on pushing for structural reforms in the public, labor, education and finance sectors with focus on job creation for the young. It has adopted incentive systems awarding employees and executives based on performances at state-run enterprises, and introduced policies for more flexibility in the labor market with a wage peak system.

In the financial sector, the ministry has revised laws allowing nonbanks, such as insurance and securities companies, to conduct foreign exchange transaction business, while trying to boost partnerships between education and companies. The financial sector reforms include allowing the establishment of Internet banks in the digital convergence age.