[ The Korea Herald – Send E-mail ]
What to do with billions of useless humans?
'Sapiens' author Harari: Artificial intelligence may better respond to emotional needs than humans
By KH디지털2
Published : Apr 28, 2016 - 13:27
Updated : Apr 29, 2016 - 14:59
It is no news that machines have come to largely replace physical labor and computers surpass human beings in processing data. But in the future, the development of artificial intelligence may render humans obsolete even in the realm of emotional intelligence, according to Yuval Harari.

“It is true that in one sense, AI doesn’t even come close to human emotion since it has no consciousness or mind and doesn’t feel anything,” said Harari at Tuesday’s opening ceremony of the 2030 Eco Forum, organized by Green Fund and held at the Korea Press Center. Harari is a history professor and author of the international bestseller “Sapiens: A Brief History of Humankind.”

Yet, AI may excel at detecting the emotional needs of human beings and reacting appropriately to them, Harari said.

“What biology tells us today is that emotions are not some spiritual experience, but the outcome of biochemical processes in the body.

“AI today is able to diagnose your personality and emotional state by looking at your face and recognizing tiny muscle movements. It can tell whether you are tired, excited, angry, joyful, in love ... it can tell these things even though AI itself doesn’t feel anger or love.”

In the future, therefore, AI could “drive humans out of the job market and make many humans completely useless, from an economic perspective” in areas where human interaction was previously considered crucial, Harari said.

“In customer services departments they have started using AI to assess the emotions of people who are calling,” he said. “AI analyzes the tone of your voice and choice of words ... and recognizes both your personality type and also your immediate emotional condition.”

According to Harari, while humans are capable of displaying their own emotions, they are often less competent at reacting to the emotional needs of their fellow beings. 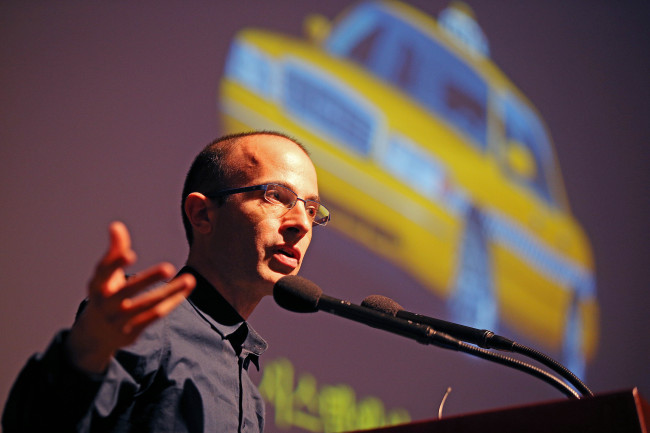 Yuval Harari, author of “Sapiens: A Brief History of Humankind,” speaks at the Korea Press Center on Tuesday (Yonhap)
“With human beings ... we sometimes shout back and in a vicious circle make ourselves more angry.

“AI ... based on its immense emotional statistical database, will know that the best thing to do is x and y and z and act accordingly.”

So what should we do if AI takes over the job market?

“Humans only have two basic abilities -- physical and cognitive. When machines replaced us in physical abilities, we moved on to jobs that require cognitive abilities. ... If AI becomes better than us in that, there is no third field humans can move to.”

The 21st century could thus give rise to the rise of a new group of economically unproductive people, Harari said.

“In the 19th century during the Industrial Revolution, the changes in technology and economy led to the appearance of a new massive class of humans, the urban working class.

“Now in the 21st century, we are approaching a new industrial revolution that will give emergence to ... an ‘unworking class,’ people who will be irrelevant to dealing with the utterly different world.”

Harari called for a possible need to come up with “completely new models” to solve the problems of the impending era.

“This, perhaps, is going to be the big question in the 21st century. What to do with billions of useless humans?”

“Watson, unlike human doctors, can be familiar with all the diseases in the world,” he said, referring to IBM’s AI system capable of answering questions voiced by humans.

“It can have instant access to my entire medical history. ... It can be a mobile app on my phone. ... With human doctors, training is a long and complicated process. Maybe it takes 10, 12 years until you get one good, experienced doctor, which costs a lot of money and effort. ... With Watson, you get not only one but an infinite number of doctors available everywhere, all the time.”

Even the medical benefits of this may come at the sacrifice of personal privacy, Harari said.

“Google has developed a contact lens for ... people who have diabetes. This lens measures the level of sugar (in the blood) every second. ... This will violate human privacy. Companies like Google will have access to information on your body, your most personal information.

“But when people are given a choice between health and privacy, they will mostly choose health. So privacy will decline.”

Harari, born in 1976 in Israel, earned his doctorate in medieval war history at Oxford University in 2002. He currently teaches at the Hebrew University of Jerusalem. His studies are both macroscopic and interdisciplinary, dealing with questions such as the existence of justice throughout mankind’s history and the relationship between history and biology.

His first book and sweeping bestseller “Sapiens,” published locally last November, argues that Homo Sapiens came to dominate the world through mass cooperation and fabricated systems. His second book, “The History of Tomorrow,” was published in Hebrew in 2015. The English version will be published in September 2016, while the Korean version will hit stores sometime next year.