The composite consumer sentiment index came to 101 for April, moving up from 100 the previous month and reaching the highest mark since the start of the year, according to data from the Bank of Korea. 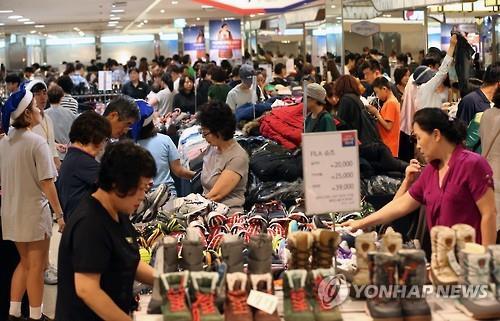 Consumers at a department store in Seoul (Yonhap)
A reading above 100 means optimists outnumber pessimists, while a reading below the benchmark means the opposite.

Consumer sentiment had remained rather gloomy since the beginning of the year with the index dipping to 98 in February, down from 100 registered in January.

The local economy, the fourth-largest in Asia, has been struggling with sluggish spending and sagging exports.

Korea's exports dropped every single month since the start of last year.

Also on Tuesday, the BOK said the country's economy expanded only 0.4 percent from the previous quarter in the first three months of the year, slowing from a 0.7 percent on-quarter growth in the fourth quarter of 2015.

Private spending shrank 0.3 percent in the January-March period, a turnaround from the 1.4 percent expansion in the previous quarter.

More expected improvements in economic conditions down the road, along with better conditions for their livelihood, the BOK data showed.