The government on Wednesday unveiled a set of comprehensive measures to boost employment of young people and women, vowing to help about 40,000 jobseekers land jobs by matching them up with employers and doling out direct payments in exchange for new hirings.

The measures came after the unemployment rate for people under 30 reached an all-time high of 9.2 percent last year, with the overall jobless rate hitting a five-year high of 3.6 percent. 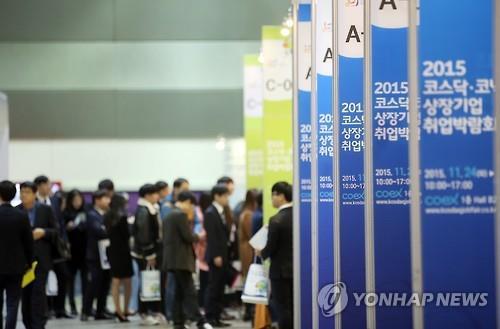 Job fair in Seoul (Yonhap)
Joblessness among the young adults grew further serious this year, as their unemployment rate hit a record-high of 12.5 percent in February.

small- and mid-sized enterprises (SMEs), which have difficulty recruiting new employees due mostly to less competitive wage and welfare benefits, by helping them earn a certain amount of money after a certain period.

If new SME employees who are promoted from internships deposit 3 million won ($2,600) into bank accounts within a two-year period, their employers and the government will additionally pay them 3 million won and 6 million won, respectively, after two years of work, resulting in a lump-sum savings of 12 million won.

The government will pick some 10,000 people for the asset-boosting program for this year, starting from July.

The finance ministry said the plan is designed to encourage young jobseekers to find a job in SMEs and help the companies fill their vacancies.

"The government doesn't need to draw up an additional budget for the program," said Deputy Finance Minister Lee Chan-woo said in a press conference. "We just reorganized our existing financial subsidies into one program. Employment-related ministries and agencies are already giving out money to young jobseekers and SMEs that hire full-time workers."

He said the program will also increase efficiency in allocating the government's job-creating funds as it will match supply and demand for labor.

In line with the job-matching promotion, the ministry will hold a nationwide job fair to give wider and open opportunities to young jobseekers and companies.

It will renew the government-run online job portal that lets visitors get information from private websites and move directly to their pages.

Colleges will strengthen their vocational training programs in order to prepare their graduates for work, the ministry added.

"Our job measures had focused on employers so far. We received recruitment plans from businesses and announced them," the deputy finance minister said. "But it is more important for the government to help young people actually get aware of the information and finally get a job."

The finance ministry said the measures also include programs for women who left workplaces due to child rearing as part of the government's agenda to keep working moms in the workforce and bring stay-at-home moms back to work in a bid to raise the country's growth potential.

SMEs will get tax incentives when they hire mothers who left work to look after their children, along with a series of programs, such as expanding workplace nurseries and part-time jobs.

"The scheme is aimed at mediating between job hunters and companies, not at creating jobs," Lee said. "It helps boost employment everywhere, raising the percentage of female and young workers."

Korea is facing demographic challenges as many baby boomers are retiring and the younger generation delays marriage and having kids, along with rapid aging and the low birthrate.

The falling birthrate and aging have fueled concerns that Korea will face a smaller workforce and an aging population, which will eventually hurt the country's economic growth and undermine its growth potential.

Experts advise the country to increase the employment of women, who have been traditionally on the sidelines of the workforce, in order to boost the country's growth potential in the longer term. (Yonhap)