Hyundai’s Namyang R&D Center is currently developing the electric SUVs, which can go up to 320 kilometers on a single charge, nearly double the mileage of sedan-type Ioniq Electric’s 180 kilometers.

“It is true that we will launch a new electric SUV,” a company spokesman said. 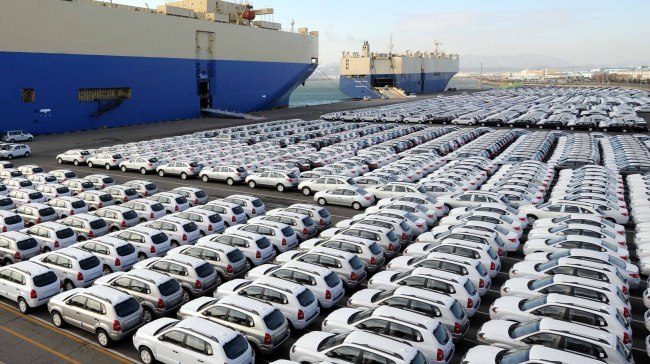 Hyundai Motor vehicles bound for export await shipment at a port near the company’s plant in Ulsan. (The Korea Herald file)
Sources said the new eco-friendly SUVs are being developed on a completely different platform from that of the Ioniq, which will also be churning out its own electric vehicles.

Market watchers said it is a natural step for Hyundai to follow the global trend toward going green. More noteworthy is that “the automaker appears to be focusing more on sport utility vehicles as Kia’s compact SUV Niro has been better received by the market than Hyundai’s Ioniq, although they use the same hybrid powertrain,” said Kim Jin-woo, an analyst from Korea Investment Securities.

SUVs have been much sought after in the Korean auto market in the last three years amid the growing popularity of outdoor leisure activities here.

The world’s first electric SUV Model X was rolled out by American automaker Tesla Motors in September, but it has reportedly seen lackluster sales due to high prices that start from $80,000.