According to a group of researchers from SNU who were summoned for questioning earlier this month, several researchers had opposed the product test request by Oxy Reckitt Benckinser, claiming the given testing process would not be sufficient to deduce credible results.

The toxicity test, however, was implemented at the university’s research lab in late 2011 under the lead of an unnamed professor, and later gave a favorable result for the disputed product, according to authorities.

The test result was submitted to the prosecution as refuting data from an earlier report by the Korea Centers for Disease Control and Prevention, saying that Oxy’s included toxic amounts of chemicals.

The prosecution also found that Oxy Reckitt Benckiser had wired several million won into a personal bank account of the professor in question, after asking for the team’s confirmation that its product had no direct links to lung damages.

The professor reportedly denied all charges, saying the money was “just a consultancy fee.”

But considering consulting fees were already included in the general service charges, prosecutors suspect the extra amount had other purposes. 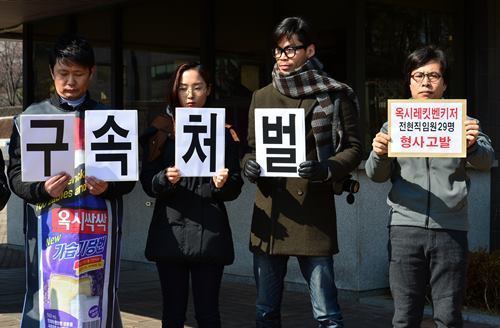 The probe was launched in late January to find out whether the firms had carried out toxicity tests before sales and whether they were aware of the possible danger caused by inhaling the chemical.

As of 2015, around 500 users who had experienced damage to their health had filed complaints. The Environment Ministry confirmed 221 cases in which direct connection between the symptoms and the product could be proven.