[ The Korea Herald – Send E-mail ]
Mirae Asset Daewoo chief urges aggressive overseas investment
By 원호정
Published : Apr 15, 2016 - 21:49
Updated : Apr 15, 2016 - 21:49
The head of South Korea's largest brokerage called on his own company Friday to more actively seek new investment opportunities in overseas stock markets, also revealing a plan to boost the company's overseas assets by at least 200 billion won (US$174.2 million).
Park Hyeon-joo, chairman of Mirae Asset Financial Group, said the stock market and securities firms were about to enjoy a new booming era, partly brought on by low interest rates that he said were already directing investors to stock markets instead of banks.
"The golden age for commercial banks has passed, and what is coming to us next is an era of stocks," Park said while meeting with some 300 officials from the group's newly established Mirae Asset Daewoo Securities. 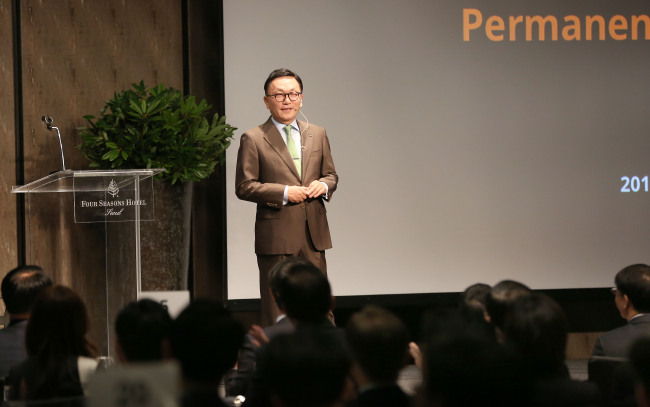 (Yonhap)
The largest brokerage firm in South Korea was established after Mirae Asset Securities, the brokerage unit of the Mirae Group, took over a 43-percent stake in Daewoo Securities from the state-run Korea Development Bank earlier this month.
Park, however, insisted no one truly understood what the era of stocks meant, accusing brokerage firms, including his own, of playing it safe while encouraging their clients to take risks.
"Securities firms advise their clients to invest in stocks or funds, but then they themselves manage their risks and seldom invest," he said. "How much more immoral could anyone ever be?"
Park said the group will invest an additional 300 billion won to launch private banking services in Los Angeles, adding the move will increase the group's overseas assets to 1.5 trillion won before the end of next year from its current 1.3 trillion won.
"I believe we must be the first to face the challenge and invest more actively in overseas markets," the 58-year-old said.
"South Korea is a small market, and so I believe we must globalize our stock transactions by developing and offering quality investment opportunities through our research center," he said. "We can provide better services if we broaden our view." (Yonhap)